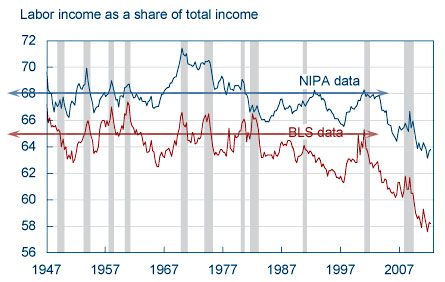 Felix Salmon passes along a new Fed study that contains the chart on the right, tracking labor’s share of national income since World War II. He comments:

This chart comes from Margaret Jacobson and Filippo Occhino at the Cleveland Fed, and it’s reasonably terrifying — yet another one of those charts where the trend is down and to the right, and where it’s only gotten worse since the end of the recession.

I don’t want to argue too much with this, but maybe I’ll argue just a little bit. If you take a closer look at the data, there’s a lot of noise but by the year 2000 we’re at about the same place we were at in 1947. This is clearest in the NIPA data, which barely shows any secular downward trend at all through 2000, but it’s also true of the BLS data, if less dramatically. (The BLS data shows a brief rebound to 1947 levels in the late 90s, but also appears to reach a permanent lower level in the mid-80s.)

In other words, it’s not that things have “gotten worse” since the end of the recession, but that things were basically pretty steady all along until the early aughts. Starting around 2000, though, there’s been a sharp and massive drop in the labor share of income. Something seems to have happened right around then to change the long-term trend. But what?

As an aside, I’ll agree completely with another of Felix’s comments:

The more powerful, if less obvious, story, is just how entrenched capital income has become in the US economy. As recently as 2000, it was at levels more or less in line with the historical average. And then, something big happened. During the Great Moderation — when yields fell on all capital asset classes — capital income went up sharply. Then the crisis happened, a classic case of a dog not barking: you’d expect capital income to have fallen enormously, at least for a year or two, but it didn’t, it just stopped rising. Most recently, in the wake of the financial crisis, capital income has been soaring again.

Felix uses this as an argument for taxing capital income at higher rates. After all, if capital income is increasingly where the income is, then we don’t have any choice. If you don’t tax it, your tax revenues are going to fall sharply.

That’s true, but I’d put a different interpretation on this. The usual reason for taxing capital lightly is that this encourages investment, and investment is what drives economic growth. But that presupposes that more capital is always and everywhere a good thing. I think this assumption deserves a closer look. The experience of the 90s, reinforced in spades by the experience of the aughts, suggests that, in fact, you can have too much capital. By taxing it so lightly, we may have encouraged too much capital formation. Without a thriving real-world economy to go along with it, this produced a housing bubble and a global economic crash. A higher capital gains tax might have helped reduce this imbalance and produced a stronger economy in the long run.

Or, if that’s too strong for you, the weaker version of this argument is that even if low capital gains taxes didn’t actively hurt the economy, they sure didn’t do it any good. Theory is one thing, but practice certainly doesn’t suggest that low investment taxes have done our economy any favors lately.