The stock market, a bit to my surprise, has reacted euphorically to today’s official announcement that the European Central Bank will begin unlimited purchases of government bonds from economically depressed countries in the eurozone (though this policy applies only to countries that behave 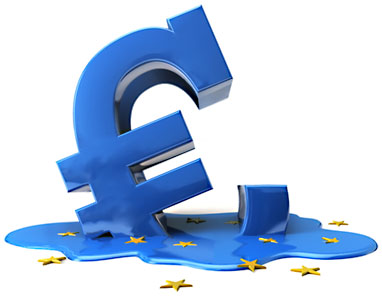 themselves and abide by Germany’s austerity dictates — see yesterday’s post for more on this). This is, of course, not the first time the euro has been rescued. We’ve been treated to a long procession of similar announcements before, and I frankly thought that investors had grown a little more jaded toward them by now. But apparently not. They still want to believe.

I’ve written enough about the eurozone’s problems in the past that I’m not really in the mood for another long post on the subject of Europe’s currency woes. Instead I’ll do a short one and see if anyone tells me I’m wrong. Start with the following axiom:

This is Europe’s fundamental problem. For years, capital has flowed out of the core (Germany etc.) and into the periphery (Greece, Spain, etc.), and this can’t keep up forever. Basically, one of three things has to happen eventually:

Let’s take these one by one. European leaders swear on their mothers’ graves that #1 won’t happen. They say the euro is “irreversible.” There’s no sign at all that #2 will happen either. Germany has shown no willingness to abandon its cherished trade surplus, no willingness to tolerate higher inflation, and no willingness to pursue any other course that falls under the general rubric of “internal devaluation.” And option #3 is off the table too. Europe’s rich countries have demonstrated no desire to permanently subsidize their poorer neighbors, and their voters would revolt if they tried — something that’s pretty understandable given the vast sums that would probably be required. Likewise, on the central bank front, today’s ECB action is a temporary measure. No one thinks they can (or should) keep it up forever.

So we’re in the same place we’ve always been. Either the eurozone breaks up or else capital flows between the core and the periphery have to be reversed. The former is supposedly off the table and the latter is politically impossible. So what gives first?

My guess is: the eurozone. That seems to be what Wall Street increasingly believes, too. Unless I’m missing something, of course. Am I?