So what’s going on with Harry Reid? When he decided, out of the blue last week, to tell a reporter that he’d gotten a call from a “Bain investor” who told him that Mitt Romney had paid no taxes for ten years, I figured he was just talking smack. He wanted to get under Romney’s skin 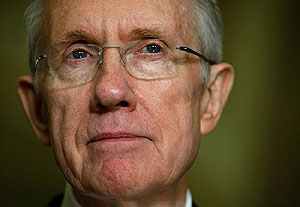 and decided this was a good way to do it. His obvious next step was to wait a day or two, then tell some other reporter that, you know, he didn’t really know for sure, and then congratulate himself for winning a news cycle or two.

But now he’s doubling down:

A second source, said to be “close to Senator [Harry] Reid,” has told CNN’s Dana Bash that Reid’s original source for the claim that Mitt Romney “didn’t pay any taxes for 10 years” exists, is a “Bain investor” and a “credible person.”….

I did speak to one source who is very close to Senator Reid who claims to also know who the Bain investor is that Reid spoke with, and insists that it is a credible person and this person if we knew the name we would understand they would have the authority and the ability to know about Romney’s tax returns.

….This was reinforced in a statement from Reid spokesman Adam Jentleson, which Bash read on the air: “Senator Reid stands by his comments. Governor Romney’s continued refusal to release his tax returns raises legitimate questions about what he is hiding and whether he paid any taxes at all. Governor Romney can easily end this debate by following the precedent set by his father and releasing tax returns.”

This is all pretty weird. In one sense, I suppose Reid isn’t really risking much. He’s not up for reelection, after all, and it would be pretty hard for anyone to prove that he’s lying. And even if he is, so what? Is Mitch McConnell going to start obstructing Senate business even more? How could he?

Still, Reid isn’t leaving himself any breathing room at all on this, and if he gets caught out it would still be pretty damn embarrassing. He’s taking one for the team in a way that I’m not sure I’ve ever seen from someone in a leadership position. Is it because he’s 72 and doesn’t care anymore? Because of some longstanding intra-Mormon feud? Because he’s just fed up with Republicans? I dunno. But if he can’t back this up, it’s about as sleazy a ratfuck as we’ve seen since the days of CREEP.

Still, it’s a little different when it comes straight from the Democratic leader in the Senate. Is that better or worse than conducting this kind of stuff in the shadows, or at arm’s length from the campaign? I guess you could argue both ways. But I’m really not sure we should be thrilled with high-ranking party leaders openly embracing this kind of stuff.

If Reid had said, “You know, my guess is that Romney didn’t pay any taxes at all in some years, and that’s why he won’t make his returns public” — well, that would have been fine. Just rank speculation of the kind that lots of people have engaged in. (Including me!) But when he specifically says that he has some secret source who’s seen Romney’s returns, that’s different. That’s almost certainly a lie. No matter how tempting it is, this really isn’t something we should be applauding.