John Cassidy thinks President Obama was wrong to reappoint Ben Bernanke as Fed chair in 2009. I thought so too, so obviously I agree. Matt Yglesias agrees too, but he doubts that Obama himself has had second thoughts:

An interesting further nuance is provided by [Cassidy’s] very last line, which says “I’d bet that right about now the president is wishing he’d made a different choice.”

What’s interesting is that my read of the situation is that Obama doesn’t wish this, even though he ought to. The key evidence is that Bernanke is hardly the only 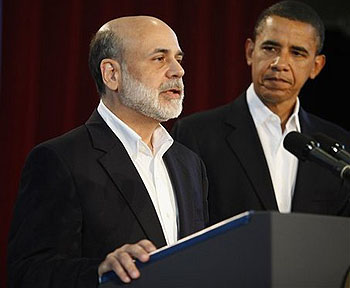 member of the Federal Reserve’s Open Market Committee who Obama has appointed, and none of his appointees are calling for monetary expansion. Instead the strongest voices at the Fed for expansionary policy are regional bank presidents—Charles Evans of Chicago has been the champion, followed by Eric Rosengren of Boston and John Williams of San Francisco.

….This is a Fed full of Obama appointees pursuing a disastrous policy trajectory that’s creating all kinds of problems for Obama. But I’ve never read any reporting indicating that the Obama economic team is upset about monetary policy….

OK, hold on right there. On the subject of Bernanke in particular, I don’t know what he thinks in his heart of hearts. Would he support a more expansionary monetary policy if he had enough backing on the Fed board? Would he have more backing if Obama had appointed better colleagues? Could better colleagues have won Senate confirmation? There’s reason to doubt it.

UPDATE: Jonathan Bernstein thinks Obama could have had a better Fed if he’d tried a little harder:

Ben Bernanke received 70 votes for confirmation — and 77 votes for cloture. That sounds like there was room for someone else, especially since Bernanke lost some Democratic votes (even on cloture). Two other nominees were approved in September 2010 on voice votes. Both nominees approved in 2012 — after the Democratic majority was slimmed down considerably — still cleared 70 votes.

Nor is this an area where I think anyone has made an argument that Barack Obama employed a full-court press on the Senate. Yes, there was some lobbying on Bernanke, but overall it’s clearly been a back-burner issue for Obama….I’m open to arguments on this one, but I just don’t see any evidence that Obama couldn’t have had a significantly different Fed if he had wanted one.

I definitely agree that Obama could have appointed a more liberal Fed chair than Bernanke. High profile appointments are different. It’s the others I’m not so sure about. But I’m open to arguments on this too.