You probably saw the headlines: Visa and MasterCard finally settled a lawsuit over charges that they colluded to charge high swipe fees on credit cards. As a result, they have to cough up $6 billion to the merchants who sued them. That’s good news for 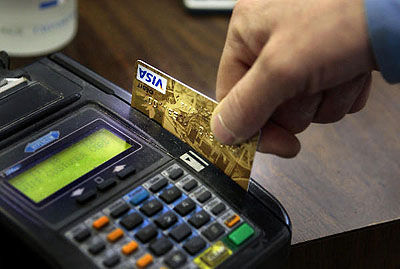 merchants, but not for me. Frankly, in a war between Visa and Walmart, I can’t get very excited about who wins.

No, you have to read down a bit to get to the exciting news:

Under the credit-card settlement on Friday, worked out over months of negotiations, merchants can charge higher prices to consumers who decide to pay for their purchases with credit cards. A customer, for example, who buys a $100 item with a credit card might be charged an additional $2.50. A judge still needs to approve the settlement.

But here’s why this is interesting in a geeky kind of way: it’s not clear who, if anybody, gets screwed by hidden swipe fees. After all, there’s nothing wrong with swipe fees per se: it costs money to run an electronic payment network, and credit card companies need some way to recoup those costs. Swipe fees are a reasonable way of doing this.

Maybe. But there are two big questions about swipe fees. First: are they abusively high? Second: who really pays them? Do they get passed on entirely to consumers? Do they get split between merchants and consumers? Or do they primarily end up balancing the costs of running a payment network between merchant and purchaser banks?

The empirical evidence on this is hazy. No one knows for sure. So I say: let’s find out. Instead of allowing card companies to unilaterally hide the fees by banning surcharges, or allowing regulators to unilaterally cap swipe fees, bring them out in the open and let the market decide. Give merchants the option to pass along swipe fees to consumers and see what happens. If they end up doing it, it’s pretty good evidence that fees were too high and were being paid at least partly by unwitting consumers, many of whom prefer the option of switching to cash once they realize the real price of using plastic. If they don’t, and things stay pretty much the same as they are today, it’s pretty good implicit evidence that everyone was getting a tolerably reasonable deal already. To semi-quote myself on this subject:

Although there’s no definitive evidence on this score, there are some reasons for thinking that fees are too high and that consumers do end up paying at least part of them. There’s a Boston Fed study showing that the net result of swipe fees is to transfer money from the poor to the rich. There’s an ECB report suggesting (unsurprisingly) that in a monopoly environment interchange fees will always be set too high. And there’s this New York Times piece about swipe fees in the debit card market, which makes it pretty clear that Visa’s fees are simply egregious abuses of its monopoly power. And if they’re abusive in the debit card market, they’re probably abusive in the credit card market too. Finally, there’s the fact that current fees are so high that card issuing banks can afford to rebate a big chunk of them in rewards programs, something that flatly makes no sense in a sane world.

That’s all suggestive, but it’s not proof. So now we get to see. Some merchants will almost certainly start charging more for credit card purchases, and after a period of experimentation we’ll end up in a new equilibrium. What will it be? Perhaps consumers will start avoiding stores that charge for using credit cards, and those stores will lose enough business that they’ll give up. Or maybe they’ll gain enough cash business that everyone else will follow suit. Maybe merchants will end up charging higher prices for small items but routinely waive the fees for larger purchases. Maybe stores in competitive markets will swallow the fees while other stores don’t. Or vice versa. Or maybe it will end up putting pressure on banks and card companies to lower swipe fees and then everything will revert to the status quo, but with no more ridiculous rewards programs. (This is my preferred outcome: keep the convenience of electronic payment, but with swipe fees basically covering the cost of running the network, not acting as a hidden profit center.)

Who knows? But one way or another, the market will figure this out, not the monopoly position of the credit card companies. And in a geeky kind of way, it’s going to be very interesting to see what happens.

EXTRA SUPER GEEKY NOTE: I think that credit card surcharges are still banned by law in some states. This won’t be affected by the settlement, which means merchants will be allowed to pass along the fees in some states but not in others. This should provide an immense amount of grist for natural experiments along state borders. I expect many doctoral dissertations on this subject in the years to come.