Ed Conard, a former Bain partner, was on Chris Hayes’ show today, and Sal Gentile gamely leads off a roundup of the interview by writing that Conard “acknowledged” that Mitt Romney remained CEO of Bain all the way through 2002 — thus implying 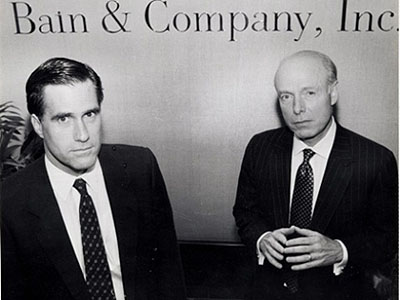 that he was at least partly responsible for decisions made at Bain between 1999 and 2002. And perhaps he was. But honestly, the key quote from Conard is this one:

“He’d created a lot of franchise value, and we were going to pay him for that,” Conard said, adding: “We had a very complicated set of negotiations that took us about two years for us to unwind. During that time a management committee ran the firm, and we could hardly get Mitt to come back to negotiate the terms of his departure because he was working so hard on the Olympics.”

If Conard is right, Romney not only wasn’t involved in Bain’s business during this period, he was up to his neck in so many alligators that he could barely spare the time to negotiate his own retirement package. I have to say, that doesn’t sound like a person who was keeping himself aware of what was happening at Bain, let alone taking even a modest hand in making management decisions.

Politically, I understand why this story has gotten so much oxygen. And it’s worth digging into, since Romney has inexplicably opened himself up to it by insisting over and over that he had literally zero involvement with Bain during the 1999-2002 period, something that seems unlikely for a CEO and sole shareholder. But honestly, as Dave Weigel says, there’s nothing all that new about this story. Romney took a leave from Bain in 1999, probably had a bit of contact with Bain’s management during the next few years, and was involved in both strategic and daily decisionmaking only tangentially. In other words, not very involved, but not quite zero either. Beyond that, the details hardly matter. Here’s more from the interview:

Asked if the factory closures and lay-offs that occurred between 1999 and 2002 were characteristic of Bain Capital’s record before 1999, Conard said, “I believe that’s true, yes. I think that Bain Capital does what Bain Capital does, which is try to make companies stronger and grow them faster.”

Conard also said that he did not believe Romney was “ashamed” of any part of Bain Capital’s record. “You say ashamed, I see great pride,” Conard said of Romney’s position on Bain Capital’s entire record. He added that he believed Romney would embrace Bain Capital’s record rather than try to distance himself from it once the campaign intensifies in the fall. “When the debate really starts, in August, September and October, we’ll see. I think he’ll own it.”

Bain is Bain. Even if Romney wasn’t much involved in management after 1999, it was still the company he built. The only problem is that back during the primaries he became so desperate to avoid being tainted by the unpopular aspects of running a ruthless private equity firm that he panicked when the inevitable attacks came and started insisting that he shouldn’t be held responsible at all for anything Bain-related after precisely February 1999. This has since been followed by increasingly wobbly towers of nonsense, like Ed Gillespie’s claim today that Romney “retired retroactively.” This was never really tenable from the start, and all of Romney’s problems have flowed from that original miscalculation. He can’t run from Bain, and he shouldn’t have tried.