Bob Somerby says he “cringed a bit” when Maryland governor Martin O’Malley went to town on Mitt Romney’s Swiss bank account during last Sunday’s chat shows. But he cringed even more yesterday when he heard Ed Schultz frame the issue like this in a question to O’Malley: “What do you think? Is it unpatriotic to have money overseas after getting the fruits of the land here in America and being successful?”

Like Bob, I’d just as soon not hear liberals questioning other people’s patriotism. Last refuge of scoundrels and all that. But politically speaking, there’s a bigger sin here: it’s just dumb. When you say “Swiss bank account,” nobody’s thoughts turn naturally to patriotism or its lack. It doesn’t even compute. The 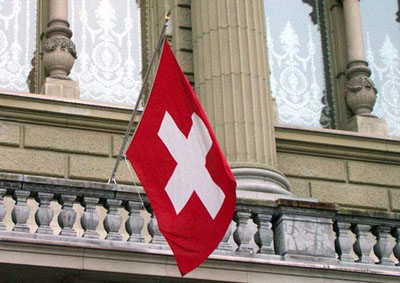 problem everyone associates with Swiss bank accounts is much simpler: they’re for rich people trying to hide dodgy money from the tax man in dodgy ways.

Stick with what works, Ed! Romney is rich. Romney puts his money in tax havens. What’s he hiding? That’s the ticket.

But wait. Should we cringe at that too? I guess we high-minded types might. But in the real world of politics this really doesn’t seem very cringeworthy. Hell, Republicans went after Romney’s personal finances during the primaries. They knew exactly what they were letting themselves in for when they nominated the guy. It would be a pretty lame campaign that decided it was too pious to take advantage of a meatball like this sailing right over the plate.

In any case, I guess I’m really more interested in Romney’s $102 million IRA. Granted, that doesn’t have the immediate resonance of “Swiss bank account,” but it raises some excellent, Bain-related-tax-dodginess questions. Nicholas Shaxson explains:

Mysteries also arise when one looks at Romney’s individual retirement account at Bain Capital. When Romney was there, from 1984 to 1999, taxpayers were allowed to put just $2,000 per year into an I.R.A., and $30,000 annually into a different kind of plan he may have used. Given these annual contribution ceilings, how can his I.R.A. possibly contain up to $102 million, as his financial disclosures now suggest?

Shaxson suggests a couple of different ways this could have happened, neither of them likely to make Romney look good. But Romney better come up with something to explain how this happened. I doubt very much that the Obama campaign — or its not-so-pious super PAC — is going to let this meatball sail by either without taking a great big cut at it.