Dylan Matthews describes a recent field test in paying teachers if they get higher-than-average test score improvements from their students:

The authors split teachers in the study into a control group, who were not offered any rewards, a “gain” group, which was promised rewards of up to $8,000 at the end of the school year, and a “loss” group, which was given $4,000 upfront and asked to pay back any rewards they did not earn….Additionally, the gain and loss groups were split, with a “team” group being rewarded on the basis of theirs and fellow teachers’ test scores, and the “individual” group being reward only on the basis 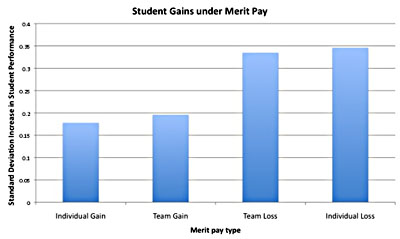 of their own scores. The conclusion: it worked, and it worked almost twice as well when the money was given at the start and then taken away.

This is a fascinating piece of confirmation that loss aversion is very real as a motivating factor. People respond far more strongly to the threat of loss than they do to the prospect of gain. In this case, teachers in the loss group did twice as well even though their reward per point of improvement was half as big. On the other hand, there was very little difference between team motivation and individual motivation.

Beyond that, though, I’d take this study as suggestive, but not conclusive. The gain group showed very tiny overall improvements in student performance, and none of the improvements were statistically significant. The loss group did better, showing gains of about seven percentile points.

This means that on average, teachers in the gain group earned $160 extra ($80 x 2) while teachers in the loss group gained $280 ($40 x 7). But the teachers must have known beforehand that their rewards were likely to be very small compared to the $4,000 baseline: In theory, they could earn thousands of extra dollars, but only by being supermen. The authors don’t say how well the very best teacher did, but based on their summary results the top teacher probably generated an improvement of about 15 percentile points compared to average. That’s a reward of $600 above the baseline. And that’s the best result. This kind of money seems like it’s far too small to produce any kind of serious impact.

So something about this doesn’t really add up. Maybe I’m interpreting their results wrong, but I simply don’t see how expected rewards this small could generate such significant improvements. Somehow, the baseline extra pay of $4,000 must have played a role here. right?