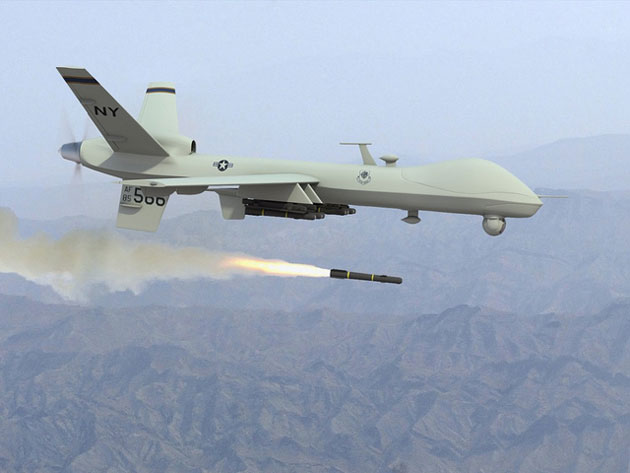 There’s long been a right-wing meme comparing targeted killing to torture, with the conclusion that torture is obviously less immoral. The Atlantic‘s Conor Friedersdorf doesn’t make this argument directly, but he alludes to it in his post on Brennan’s new authority:

So to sum up, Barack Obama insists while campaigning that “enhanced-interrogation techniques” are a euphemism for illegal, immoral torture that makes us less rather than more safe from terrorism, and insists that the Bush Administration was imprudent for using those tactics.

After being elected, Obama forbids those tactics from being used. And he names as a top counterterrorism adviser someone who advocated the tactics he regards as imprudent and immoral — ultimately entrusting him with more power than anyone else to decide whether various figures should be assassinated by our classified flying robot army.

There’s a really important moral and legal distinction to be made between torture, which is always illegal and always wrong, and killing, which can occasionally be both justified and legal. And conservatives who argue that targeted killing is worse than torture are not saying we should stop killing people—they’re saying we should also torture them. There is an obvious legal and moral bright line between mistreating people in our custody and killing on the battlefield.

Blurring the lines between custodial treatment and killing combatants only aids lawlessness. The laws of war exist to contain violence to combatants, who have consented to fight one another with the knowledge that doing so could lead to their deaths. This is why we should (but we sometimes don’t) make a distinction between those who fight willingly and those who cannot consent, such as child soldiers. By definition, no one consents to being tortured.

Nevertheless, liberals’ uncritical embrace of the Obama administration’s widespread use of targeted killing represents a significant departure from their stated values. Although the ethics of targeted killing don’t parallel the ethics of torture (except as far as disclosure is concerned), they do resemble the ethical debate around detention. For most of the Bush administration, liberals fought against President Bush’s attempt to place suspected terror detainees in a legal black hole without habeas rights. Bush’s critics understood that the concept of membership in a terrorist group is far more nebulous than being a soldier in a uniformed military. Establishing that the individuals we’re treating as terrorists are actually terrorists is therefore a moral imperative.

With targeted killing, the same issues are at play. Unlike detention, however, the results of targeted killing are irreversible. Dead is dead. And the collateral damage is considerably greater, because civilians can be killed along with the target. Osama bin Laden’s death was the most justifiable use of targeted killing in the past decade, but he’s obviously also a unique case. What percentage of the thousands who have died in American drone strikes represent as clear-cut a choice as killing the man responsible for carving a bloody hole into New York City? That lethal force is sometimes justified does not absolve the government to ensure that it is only used when it is justified.

Yet that same insistence on accuracy, on making sure that we “had the right guy,” so to speak, is largely absent in the debate over drone strikes. Liberals have been largely content to use Obama’s body count to defend his foreign policy record without confronting the moral implications of our vastly expanded covert battle against Al Qaeda and its affiliates. The admirable skepticism towards Bush’s claims that those imprisoned at Gitmo were “the worst of the worst,” long since vindicated, is absent.  Many of the same people who fought the Bush-era imperial presidency—groups like the ACLU and the CCR—still hold fast to their banners, but for the most part political liberals have quit the field, preferring to defend their president from right-wing lunacy about Democratic weakness. That’s a tragic abdication of responsibility that will have profound implications for national security in the future.