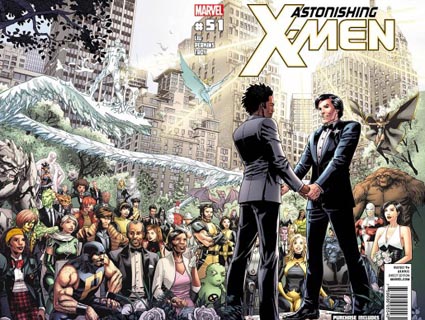 Marvel Comics’ Northstar, a French-Candian superhero who came out as gay in the 1990s, is getting married to his longtime boyfriend Kyle. Jill Pantozzi at The Mary Sue explains:

In a press release Axel Alonso, Marvel Editor in Chief, said, “The Marvel Universe has always reflected the world outside your window, so we strive to make sure our characters, relationships and stories are grounded in that reality. We’ve been working on this story for over a year to ensure Northstar and Kyle’s wedding reflects Marvel’s ‘world outside your window’ tradition.”

Judging by the images, Northstar and Kyle appear to be getting married in New York, which legalized same-sex marriage last year. Popular culture has played a significant role in humanizing gays and lesbians to straight audiences—Vice President Joe Biden literally (literally) cited the NBC sitcom Will & Grace as contributing to his “evolution” on the issue of same-sex marriage.

Like many other subcultures, comic book geeks can veer from the open-minded to the distressingly homophobic. Marvel rival DC Comics will soon be letting one of its established characters out of the closet, which for the reasons Alyssa Rosenberg outlines here seems much more risky than a same-sex wedding. Marrying off Northstar, who’s long been understood to be gay, is different from altering an existing character. Comic book geeks, you must understand, are frequently possessing of a Burkean reverance for tradition. Same-sex marriage is no big deal, but a writer who changes the color of Superman’s costume could get burned in effigy.

Given how some corners of the conservative media reacted to Marvel introducing a black, Latino Spider-Man last year, we can probably expect some culture war rage over this latest attempt to warp the minds of children into thinking that gays and lesbians are people. But take heart, anti-marriage equality conservatives! Comic book marriages tend to be doomed, because happily ever after doesn’t work out so well when you have to keep writing new adventures every week. Between telepathic affairs, space-time continuum altering Faustian bargains, homicidal rage, and plain old continuity reboots, Northstar’s straight colleagues face existential threats to their unions that are far more serious than a gay superhero getting hitched. Those existential threats are a lot like the “existential threat” marriage equality supposedly poses to “traditional marriage” in that they’re also entirely fictional.