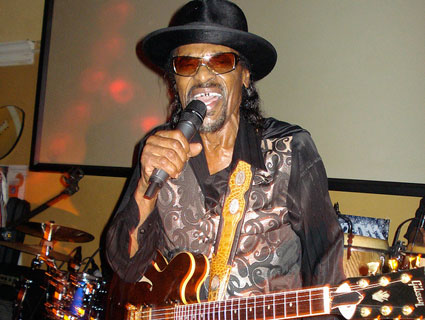 Judging by my college experience, for folks outside of the DC area, Go-go music probably conjures images of mod dancers in high boots. Within DC, though, it refers to the city’s predominant musical genre, pioneered by the incomparable Chuck Brown, known as the Godfather of Go-go, who died Wednesday. The Root‘s Natalie Hopkinson, who recently wrote a history of Go-go music, has a great retrospective on the social and cultural trends that birthed Go-go:

In the years that followed the uprising, Chuck would tell the kids more than just that. At a time when urban planners and policymakers ceded authority over inner-city Washington to the hustlers and the pimps, Chuck Brown showed kids how to play music. He showed them how to hype the audience through West African-style call and response, how to slow down ecstatic crowds to groove to the same sultry, slow-boiling conga beat. He showed them how to knit the audience into a community and to train them to come back, night after night, generation after generation.

Chuck taught D.C. natives to take those charred ruins of the civil rights movement in riot-blackened places like U Street and use them to make art. Not the kind of art that crosses over onto pop-music charts or that gets co-opted by multinational entertainment companies or even gets an NEA grant, but, nonetheless, the kind that generations of black Washingtonians have used for fellowship.

Despite the migration of DC residents south, either permanently or to historically black colleges and universities, Go-go never quite managed to make it beyond the DC metro area. Some artists tried—you can hear it’s influence in a few nationally released tracks, like Jill Scott’s “It’s Love,” Ludacris’ “Pimpin’ All Over the World,” and of course Wale’s “Pretty Girls,” but it remains a DMV (DC-Maryland-Virginia) thing. There’s really nothing on Earth like a go-go, and absent the immediacy of being there, hearing the music, and dancing to it maybe the genre’s appeal just can’t really be understood. I’ll spare MoJo readers an account of my first time at a Go-go, but aside from his profound role in shaping the culture of the city, every semi-awkward dude in DC owes Brown a debt of gratitude for his contributions to a genre of music that tends to be less uh, labor-intensive for men.

One of the great things about Go-go is bands doing covers of pop songs. This Rare Essence version of Ashlee Simpson’s Pieces of Me is one of my favorites, just because it’s weird.

Adam Serwer is filling in while Kevin Drum is on vacation.