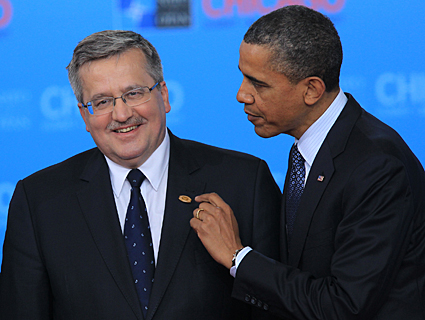 President Obama and President Bronislaw Komorowski of Poland in May 2012.Stacey Wescott/Chicago Tribune/Zuma

For most Americans, referring to a Nazi death camp located in Poland as a “Polish death camp” makes clear sense. That it was a Nazi camp simply goes without saying. To my knowledge, virtually no American has ever blamed Poland itself for a part in the death camps. After generations of films, video games, and novels about World War II and the Holocaust, Americans are as familiar with the Nazi camps as we are with our own Civil War. So with President Obama referring to a Nazi camp as a “Polish death camp” we understand clearly that he is referencing the location of the Nazi camp, not implying that it was somehow Polish.

Or we would, if it wasn’t the president, and this wasn’t an election year, and our political discourse was slightly more elevated than it actually is.

Writing at The Daily Beast, David Frum argues that Obama was out of line:

The president intended to honor Jan Karski, a Polish-born U.S. citizen, who died in 2000. Karski was a hero of the Polish resistance, the courier who brought to the outside world the irrefutable proof of the Nazi extermination campaign against the Jews of Eastern Europe. But instead of honoring Karski, the president stumbled into the single most offensive thing he could possibly have said on this occasion.

Here’s what the president said:

Before one trip across enemy lines, resistance fighters told him that Jews were being murdered on a massive scale, and smuggled him into the Warsaw Ghetto and a Polish death camp to see for himself.

Outside of election season it’s hard to see how Frum and other commentators could get so worked up about a statement like this.

On the one hand, the Poles themselves have been extremely sensitive over this phrase for years now. They’ve issued public statements discouraging its use, even going so far as to request that UNESCO change the name of Auschwitz Concentration Camp to former Nazi German concentration camp Auschwitz-Birkenau. In all fairness, president Obama likely should have been aware of this. The president is diplomat-in-chief, and he’s visited Poland in the past (where he received one of the most unique diplomatic gifts of all time). It’s not that much to expect the American president to do his homework.

And yet the uproar over these statements seems to imply that the president was being purposefully insulting at worst, and hopelessly ignorant at best. The right is doing its level best to affect the same outrage as the Polish people, using the cultural sensitivities of a European country to attack the president—an irony that I’m still struggling with.

Even the Polish reaction to this strikes me as overwrought. There were death camps set up by the Nazis all across Europe, and these are often referenced as either Nazi death camps, by their individual names such as Treblinka or Auschwitz, or by their geographical location. Yet even if the camp is referred to as a Polish or Hungarian death camp, everyone talking about it knows full well that it was run by the Nazis.

Respecting the sensitivity of the Polish people is one thing—and I think it’s absolutely fair to respect Polish wishes and stop using the phrase to as great an extent as possible. They’ve suffered untold hardships, first at the hands of Nazi Germany, then at the hands of the Soviets. It’s not so hard to say “Nazi death camps located in Poland” after all.

But turning honest mistakes into petty feuds is another thing altogether. And either way, this gaffe and the overblown reaction to it are an excellent distraction from actual issues, feeding the American political circus yet another non-troversy to keep the proverbial show rolling.