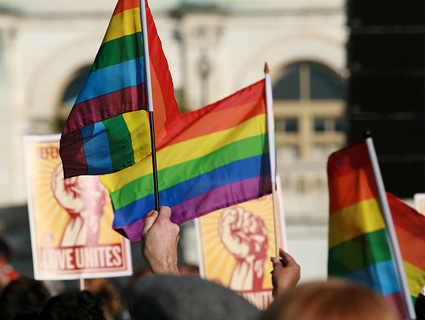 The gay-marriage debate hit a major milestone today. A federal appeals court has found section 3 of the Federal Defense of Marriage Act unconstitutional in violation of the Equal Protection Clause.* The groundbreaking ruling will no doubt end up before the Supreme Court.

Interestingly, the three judge panel was comprised of two Republican appointees. The unanimous decision was made at least partly on federalist, states’ rights grounds.

“One virtue of federalism is that it permits this diversity of governance based on local choice, but this applies as well to the states that have chosen to legalize same-sex marriage,” Judge Michael Boudin wrote for the court. “Under current Supreme Court authority, Congress’ denial of federal benefits to same-sex couples lawfully married in Massachusetts has not been adequately supported by any permissible federal interest.”

Now, there’s a dark and a light side to federalism. States’ rights—and really, we should put “rights” in quotation marks here—have been an excuse for plenty of atrocities, including slavery and segregation. The states in question are home to plenty of their own tyrannies, great and small.

On the other hand, right now a handful of states have stood in defiance of bad federal laws, including DOMA and the federal ban on medical marijuana. When gay couples married in Massachussettes are denied federal healthcare benefits, or when federal agents take down marijuana dispensaries in California, it’s hard not to sympathize with a little federalism. It’s a facet of our democracy that has, like democracy itself, been used for good and ill.

In other words, federalist arguments aren’t easily dilineated into conservative and liberal camps. I think this actually complicates things for the “traditional marriage” forces. We’ve already seen some major conservatives like Ted Olson take on the gay-marriage ban in California, and federalist/small govermnet arguments rest at the heart of Olson’s case.

These unlikely allies for pro-gay rights activists underscore why I’m mostly optimistic about the future of this country: However messed up the Republican party is, and however out of control the conservative movement may be, American conservatism is still rooted in a version of liberalism. Very little of the European traditionalism that defined conservatives in the past has survived in American conservatism.

Sometimes I think that’s part of the reason the conservative movement seems so off-kilter so much of the time—so quick to latch onto strict rhetorical and ideological positions that aren’t really guided by a coherent set of principles. But it also means that buried beneath the wreckage of so many contemporary conservative arguments is a strand of liberalism that actually does value progress, individual rights, and equality.

Americans are increasingly becoming more pro-gay rights, and the next generation will be even more so, across all polititical ideologies. Maybe conservative acceptance of gay marriage will be based on federalist or small-government arguments, but I suspect a lot of it will eventually be about freedom.

This post has been updated to clarify the scope of the ruling. Erik Kain is guest blogging this week while Kevin Drum is on vacation.