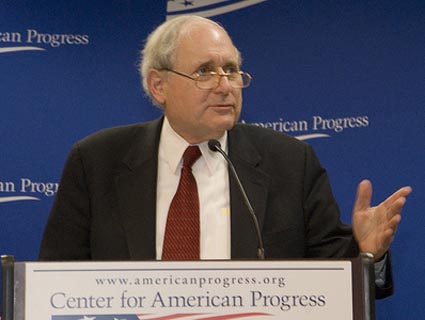 “They don’t have to exercise it, but I’m not so sure that they want the authority removed to arrest or to capture, because we’re talking about war here — somebody who’s declared war against the United States, just because we capture them on U.S. soil,” Levin said.

“We can hold them on U.S. soil, but I don’t think we want to eliminate the authority of the Executive Branch to hold someone who’s declared war on the United States as an enemy combatant,” he said.

Left unexplained is why mandatory military detention is needed at all. Umar Abdulmutallab, who inspired the mandatory military custody provision after he set himself on fire trying to blow up a plane, would not have been granted bail in a federal court. If the evidence is that strong that someone is a terrorist, there’s no need to put them in military custody. Levin fails to offer even a single argument for why military custody would be preferable to civilian custody. Instead, his argument is a moral one: We’re at war with these people, so we’ll treat them like warriors.

In Levin’s preferred world, the part of the process where the government proves that suspected terrorists are who the government says they are is no longer a necessary prerequisite to locking them up for the rest of their lives. But this isn’t the Civil War, and Union and Confederate soldiers aren’t lining up in uniform to fire rifles and cannons across corpse littered battlefields. The reason why due process is so crucial is that identifying who actually is a terrorist isn’t a simple matter—but it’s also not as though the process is taking place amidst the chaos of an active theater of military combat.

The new defense bill is scheduled for a vote in the House on Thursday, but even if Smith and Amash get their proposal through the lower chamber, there’s a bipartisan group of Senators who want to protect the president’s authority to imprison American citizens without proving they’re guilty of anything at all. Barack Obama, for his part, hasn’t weighed in on either side—but given that the president has promised never to attempt to use this power, it’s a mystery why he wouldn’t vocally oppose it.  If Obama and his advisers believe this kind of indefinite detention is an anathema to due process, why not support a bipartisan effort to ensure that Americans’ constitutional rights aren’t dependent on the whim of whichever president is in office?

At least the battle lines here are clearly drawn in a way they weren’t over last year’s defense bill. One group of legislators thinks Americans can be deprived of their liberty in their own home country without a trial. The other thinks the government has to actually prove you’re guilty of something first.