Brad DeLong writes today that the standard bargain between Democrats and Wall Street is simple: we might tax you a little more than Republicans, but in return we’ll provide you with “competent economic management in striking contrast to that offered by the ideologically-blinded wingnuts who are the Republicans.” And President Obama has done just that. So why do the lords of finance almost unanimously hate his guts these days?

A big part of it, I think, is that Obama was not just supposed to make things better: he was supposed to fix things — to bring things back to “normal”….[But] Obama did not fix things: Wall Street bankers 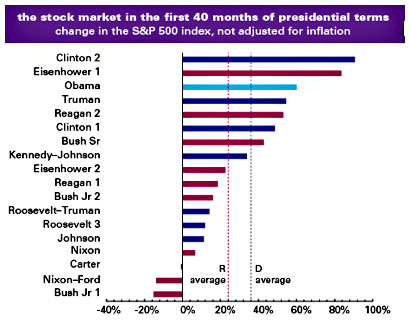 I’m not sure I buy this. My sense is that Wall Street financiers, whatever their other blinders, take a pretty intellectual approach to the macroeconomy, and they know that the economy is doing about as well as they could have hoped back in 2008. The stock market is up, corporate profits are up, and bonuses have rebounded. From a purely self-interested financial point of view, I don’t think very many of them are really dissatisfied with the Obama/Geithner/Bernanke regime.

So what is it? My guess is two things. First — and there’s no point in pulling punches here — they’re a bunch of spoiled brats. Over the past three decades they’ve gotten accustomed to the kind of deference normally offered to grand viziers of the Sublime Porte, and they’re simply enraged at the fact that Obama not only doesn’t seem very impressed by their accomplishments, but even criticizes them every once in a while. At this point, they have fully convinced themselves that (a) they weren’t responsible for the 2008 crash in any way, (b) it’s populist demagoguery to suggest otherwise, and (c) the government should stand with them against the rabble-rousers so that they have the freedom to run the world again. Obama doesn’t quite agree — not totally, anyway — and that maddens them.

Which brings us to the second thing: regulation. Like a lot of business people, I think they hate regulation more than they hate reduced profits. They’ll fight higher taxes, but in the end, that’s a pure money thing and they’re accustomed to winning and losing money battles. But regulation wounds them far more. It’s a signal that they aren’t to be trusted. It’s a reminder that someone else can tell them what to do. It makes it harder to earn money from purely financial manipulation. Dodd-Frank and Basel III may, in the end, not be very stringent regulatory regimes, but they’re still viewed as unfair punishment. And we all know how children react to punishment they view as unfair. They sulk.

In 2008 Wall Street somehow convinced itself that Obama understood them and would protect them from the mob. In reality, he’s mostly done that. But he’s only done it 80%, not 100%. That missing 20% is the reason they’ve turned on him like a pack of rabid dogs.