Mild-mannered physics professor Chad Orzel writes this warning to his commenters at the end of a post today:

Make sure to keep a civil tone, though. I know that tempers run high on this issue, so choose your words carefully.

Holy cats! What was that post about? Israel’s treatment of Palestinians? Whether the tea party is full of racists? President Obama’s socialist tendencies?

No. He was writing about the Justice Department settlement yesterday with book publishers over their price collusion with Apple on e-books. Apparently this is a touchy subject. Which reminds me: I’m late to this because I wasn’t paying attention, but today I finally stirred myself to read up on the actual terms of the settlement. Apparently 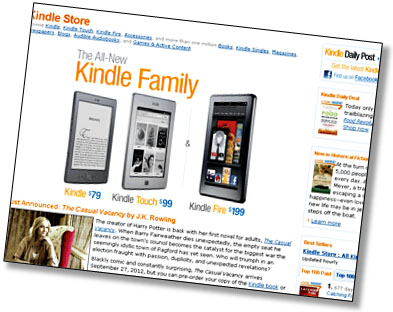 DOJ isn’t requiring publishers to abandon the agency model, where they set the retail price and simply pay retailers a percentage, but they are insisting that retailers be allowed to discount prices if they want:

This doesn’t kill the agency model outright, but does modify it well beyond what’s widely recognized today. Suppose a publisher prices a book at $10 list price, and a retailer agrees to a 30 percent commission, or $3 on a full list sale. Under these conditions, those retailers would be permitted to sell the book below list price, presumably taking the discount out of their own $3 commission. The publisher would still net $7, but lose its ability to maintain prices.

The DOJ’s proposed terms expressly permit publishers to set a soft floor on discounts, but not a hard floor. Publishers can enter into one-year agency agreements that stipulate that the retailer can sell individual titles at a loss, but must show a profit overall for all the books it sells from that publisher’s catalogue.

That’s interesting. So Amazon can take a loss on specific e-books if it wants, but it can’t take a loss on its entire e-book business with a particular publisher. Here’s the wording from the DOJ description of the settlement:

[Retailers] would be permitted to discount [] individual e-book titles by varying amounts (for example, some could be “buy one get one free,” some could be half off, and others could have no discount), as long as the total dollar amount spent on discounts or other promotions did not exceed in the aggregate the retailer’s full commission from the Settling Defendant over a one-year period. This provision [allows publishers] to prevent a retailer selling its entire catalogue at a sustained loss.

If I’m reading this right, this sounds like a big win for Amazon. Under the old wholesale model, Amazon was taking an actual loss on all those $9.99 e-books. Under the modified agency model here, Amazon could discount every single title by 30% and still break even.

Most likely, this means the end of the agency model in the e-book market. Nobody wants to make life easier for Amazon, after all. The question then is how long Amazon is willing to sustain losses on its e-book business. A long time probably. But if publishers go back to a standard wholesale model, and Amazon goes back to its loss-making $9.99 price point and regains the 90% market share it had previously, I wonder if, at some point, they open themselves up to a DOJ investigation for predatory pricing? That’s a tough case to make, but not necessarily an impossible one.

Or, alternatively, some completely new distribution model takes over. I won’t speculate about that since I’m sure anything I could dream up has already been discussed to death elsewhere. But there are plenty of fairly obvious ideas, since e-books simply don’t require the kind of distribution channel that physical books do — and if Amazon does end up in a monopoly position for e-books, I imagine DOJ will eventually force them to open up the Kindle platform so that others can download e-books to Kindles.

Interesting days ahead for book publishers. I’m sure glad I’m not one.