David Corn’s latest book, Showdown, is a detailed account of the aftermath of the 2010 midterms and President Obama’s clash with a rejuvenated Republican Party. But it’s decidedly not a tour d’horizon of the entire political landscape during the following 12 months. It’s told almost entirely from the viewpoint of Obama and the Obama White House, and this is where its greatest value lies. Through the lens of policy battles, you get a remarkably vivid pen portrait of Obama himself and how he thinks.

Here’s an excerpt from near the beginning of the book. It’s December 2010. Obama wants to extend the Bush tax cuts for the middle class but not the tax cuts for the rich. Republicans have made it clear that they’ll spend the entire month until Christmas delaying and filibustering unless Obama agrees to extend all the cuts. That would mean no time to 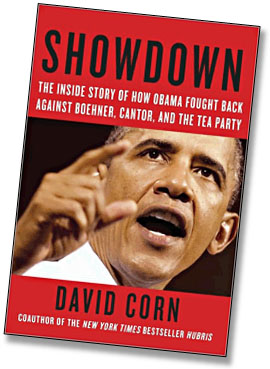 get anything else done, followed immediately by the seating of a new Congress with a Republican majority in the House. So Obama cuts a deal that includes a payroll tax holiday, an extension of unemployment insurance, and a slew of tax credits:

Obama had arguably won the immediate policy battle with the Republicans. For yielding on the tax cuts for the rich, he had gained $238 billion in stimulus….The Republicans had pocketed $91 billion in the top-bracket tax cuts and $23 billion for the estate tax measure.

The math was on Obama’s side. But could the president now win the political and messaging war?….Progressive activists accused Obama of betrayal. Bending on the Bush tax cuts for the rich and conceding on the estate tax was what mattered for them, not the other side of the deal. Nor did they realize that Obama was trying to clear the path for a wider agenda: Don’t Ask/Don’t Tell, New START, and more.

….[The next day] Obama held a press conference to discuss the deal….Obama was riled up — the public option controversy still stung — and he continued defending compromise as a necessary means of reaching long-term progressive goals….He was not just defending the tax-cut deal. He was defending his entire presidency — not from the barbs of his rabid Obama-is-a-secret-Muslim-socialist foes on the right, but from the criticism of his purported allies on the left: “To my Democratic friends, what I’d suggest is, let’s make sure that we understand this is a long game.”

It looked as if Obama was more upset with the Left for not applauding this deal than he was with the inflexible, filibustering Republicans for causing the dilemma. Obama believed he deserved more credit for this hard-fought compromise and for his previous accomplishments — and he wanted more backing from the Left for the tough decisions he’d have to make in the coming years while dealing with recalcitrant GOPers.

Obama was right on this: the tax-cut deal had become a defining moment for his presidency.

I’ve long considered the 2010 lame duck session to be an almost perfect distillation of everything Obama-related. David is right: Obama got a lot of flack from the lefty base over his budget deal. But look what it did. It produced an additional mini-stimulus, probably the biggest anyone could have squeezed out of Congress at that point. It paved the way for the repeal of DADT and the ratification of New START. It made time for the food safety bill, the 9/11 first responders bill, and the Child Nutrition Reauthorization package to pass.

And the cost? A bum deal on the estate tax, granted, and a temporary extension of the Bush tax cuts for the rich. That’s it. The Bush tax cuts didn’t get extended forever, only for two years, when we get to fight it out all over again. And the truth is that the economy was fragile enough in 2010 that extending the cuts — even the high-end cuts — was arguably the right thing to do anyway.

So that’s Obama: quietly driving pretty good deals; willing to take public lumps as long as he gets something worthwhile out of all the dealmaking; giving up surprisingly little; and then getting surprisingly little credit for it all. It’s no wonder he gets a little annoyed sometimes.