Austin links to a paper by David Cutler, who admits that “Productivity growth is notoriously difficult to measure in health care.” Why? Because “Accurate productivity assessment requires a good output measure.” Official figures put productivity growth in the healthcare sector at -0.2% per year, but:

Other studies have looked more closely at health care costs and output, and can be used to assess the productivity of medical care over time. Figure 2 shows the cost 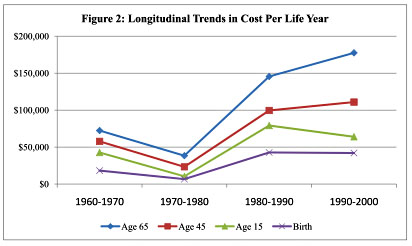 per additional year of life attributable to medical care between 1960 and 2000.

I just flatly don’t get this. For one thing, it makes sense that people will value their lives more highly as they get richer. America is a much richer country than it was in the 60s, and it’s hardly surprising that we’re willing to spend a lot more to extend our lives by a year than we were then. This is more a reflection of spending priorities than it is of productivity.

More importantly, though, this just seems like a terrible measure. Even though everyone acknowledges that lifespan isn’t a very good way of measuring the quality of healthcare, we keep on using it anyway. But that’s like looking for your keys under the streetlight just because the light is better there. You end up missing enormous strides that have nothing to with lifespan. Lasik surgery doesn’t extend your life, but a lot of people sure get a lot of benefit from it. When I tore a meniscus in my knee, I recovered fully and quickly thanks to arthroscopic surgery. I thought that was great, but it didn’t extend my lifespan by a single day. Asthma inhalers save lives, but they also dramatically improve quality of life above and beyond that. The list of advances like this is endless.

I don’t know how you measure that. Maybe it’s impossible. But I halfway wonder if we should just admit that we have no good measure of healthcare productivity and give up on pretending otherwise. Just treat it like a gigantic productivity black hole, and concentrate our attention instead on simple efficiency, where we do at least have decent comparative measures. Some regions, and some practices, really do produce similar outcomes with less spending than other areas and practices, and that’s worth looking at. But I’m not sure how you translate that into a traditional productivity measure.

We spend a lot of useless money on medicine. No argument there. But that’s as much a value statement as it is an objective measure of productivity. I might think it’s a waste to spend $100,000 keeping an 80-year-old man barely alive in a hospital bed for an extra six months, but if the man is your grandfather, you might disagree. And if that happens more today than it used to, it’s just because we all have a lot more money to spend on this stuff, not because medicine has gotten less productive.

However, I’ll be curious to see further posts on this subject from Austin and the gang. Are there better measures of healthcare productivity out there? I’d be interested in hearing about them.