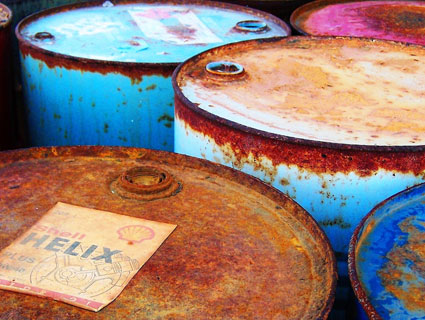 Gasoline prices are on the rise! How come? And what does it mean? Let’s do a Q&A.

Q: How much has the price of gasoline increased recently?

A: Since the beginning of the year, the average price of gasoline has increased by 42 cents, from $3.36 to $3.78 per gallon. That’s from the US Energy Information Administration, and it’s an average of all grades, all formulations, across all regions of the country. The price has gone up more in some regions (like California) and less in others (like the Rocky Mountain states). You can see the regional variations here.

A: Gasoline prices are linked very tightly to crude oil prices. Stuart Staniford has the wonky graph here and the wonky explanation: “Technically, 97% of the variance of the price of gas is explained by the price of oil.”

Q: So what’s the relationship? 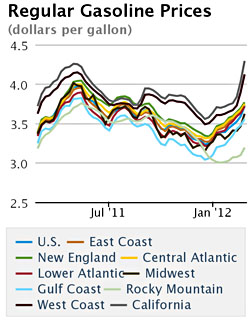 Hamilton’s rule, this should have produced an increase of 40 cents in the price of gasoline.

Q: Hey, that’s almost exactly right! So there’s nothing more to it than oil prices?

A: Pretty much. There are a few miscellaneous other factors, like refinery shutdowns and the change from winter to summer formulations, but they don’t amount to much.

Q: Fine. But why have oil prices gone up?

A: In the long run, the answer is just supply and demand. Oil production has plateaued over the past few years because everyone in the world is pumping full out, and there’s very little spare production capacity left. Meanwhile, because the global economy is recovering, demand has increased. Americans may be using less oil these days, but that doesn’t make up for rising consumption in Asia, particularly China and India. So the basic reason for climbing oil prices is Econ 101: When global supply is stagnant and global demand goes up, prices increase.

In addition, there are other theories about why prices have specifically gone up just in the past couple of months. Bernie Sanders thinks it’s because of oil speculators on Wall Street. Sanctions on Iran may be hurting their ability to ship crude. Additionally, some analysts think that some of the price increase is driven by fear that Iran might cut off oil shipments entirely, or else slow or close the Strait of Hormuz. In other words, some of it might be driven by panic.

But here’s the main takeaway: Demand for oil is pushing up against supply limits, and that’s a permanent condition. From now on, demand is always going to be bumping up against supply limits because even if supply rises a bit in the future, demand is rising even faster. And when supply and demand are that tightly constrained, every small bump in demand or disruption in supply causes a big swing in prices. Last year it was the war in Libya that caused a price spike. This year it’s Iran. But it’s always going to be something. It doesn’t take much anymore to produce a $30 swing in oil prices.

A: Nate Silver crunched the numbers on this and concluded that the effect was actually pretty small. High prices at the pump probably have a negative effect on an incumbent president, but not much of one.

A: Not so fast. You also need to factor in the fact that higher oil prices are likely to slow down the economy. Jared Bernstein provides the nickel summary: “In terms of the overall economy, what you worry about here is a) oil is an important production input to everything we do, and b) higher gas prices mean less disposable incomes for people. Those are the dynamics behind the rules of thumb—the ones that say a $10 increase in a barrel of oil translates into about a quarter more per gallon at the pump, and, if it sticks, could shave 0.2% off of GDP growth. Not good, and why oil is #2 on my list of threats to the recovery (right after fiscal drag and before Europe).”

James Hamilton has done a lot of academic work on the effect of oil prices on the economy, and the effect is very real. If prices stay high, it could put a damper on economic performance later this year, and that in turn could hurt Obama’s reelection chances.

Q: Do you have any good news to share?

A: Not really. New shale oil finds in North Dakota might increase global supplies a bit, but probably not enough to make up for increasing demand from China and other emerging economies. Basically, prices are going to stay high for the foreseeable future; even small supply disruptions are likely to cause big price gyrations; and big supply disruptions are likely to cause full-blown recessions. Like it or not, this is our future. I recommend you buy a motorcycle.