Karl Smith predicts that this chart will “make the rounds,” and since Karl is always right I guess I’d better post it. Here it is: 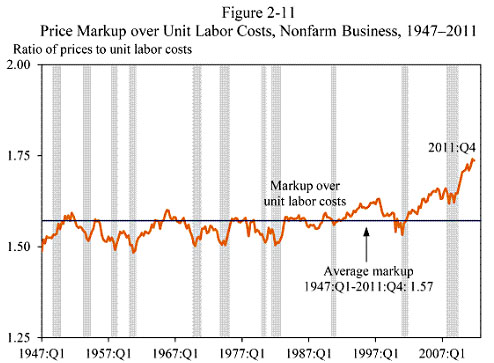 Technically, the point of this chart is that prices go up at about the same rate as labor costs, but no more. If you try to raise prices too much, competition will eventually force you to lower them. Likewise, if you try to push labor costs down, workers will go elsewhere and you’ll eventually have to increase wages to attract new employees. Generally speaking, labor gets a fairly steady percentage of economic output, and as productivity goes up, wages go up.

Until about 2000, that is, when wages began to stagnate but prices rose steadily anyway. Output continued to increase, but none of the increase was going to workers. Karl’s thesis is that the Industrial Revolution was a one-time deal and it’s over now:

We are returning to an environment where productivity gains do not accrue to unskilled labor because they are imbedded in the brains of the innovators….What this chart hides, but I believe is also true is that capital is facing a similar collapse….For now, it is still in the interest of innovators to tap public equity markets and doing so means that they come under some — but not absolute — pressure to pay a dividend.

However, I have a hard time believing this will not come to an end. The money available in private pools will be sufficiently large that innovators can strike side deals that let them walk away with almost all the profits.

Savers will get nothing.

Is this true? I don’t know. The big brains will have to fight it out. The reason I’m posting this chart is because it’s a new addition to my collection of evidence that our current economic problems started not in 2008, but in 2000 — or, possibly, in the mid-90s, but masked for a few years by the dotcom boom. Something fundamentally changed around then, and you can see this in a whole host of economic indicators.

But what? There are plenty of theories, but I’m not sure which ones to believe. However, I’ve sort of semi-promised my editors a magazine piece on this subject sometime in the year 2014 or so, so I’m continuing to collect this stuff.