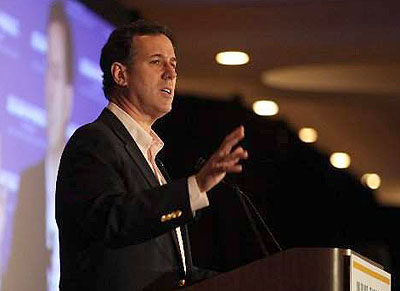 Rick Santorum has been on a populist tear lately, a job made easier by running against the endlessly awkward Mitt Romney. But President Obama is his main target, and as we all know by now, he said this on Saturday:

Set aside for a moment the fact that this isn’t true. Obama, in fact, wants everyone to go to a university, a community college, a technical school, or a trade school. But the audience listening to Santorum didn’t know that, and Dave Weigel reports that they’re totally on Santorum’s side:

Here in northern Michigan, I’ve found that Republican voters are 1) aware of the “controversy” and 2) totally sympatico. “I totally agree with Santorum,” said Larry Copley, a retired state cop waiting for the candidate at the Streeter Center here. “College isn’t for everyone.”

“We see a lot of jobs going unfilled because people [aren’t] being trained for them,” chimed in Larry’s wife, Margo. “Plumbing, construction, jobs like that.”

I don’t think it’s hard to understand the sentiment here. Half a century ago, it’s true that the working class didn’t have a widespread disdain for college. In fact, it was common to hope for a better life for your kids, with college as the ticket out of the factory/coal mines/construction site. But it’s also true that no one felt it was mandatory. It was something to aspire to, but if your kids weren’t college material, there were plenty of other good jobs available to them. No one suggested that a kid without a degree was a loser.

But things are different today. If you’re in the working class, college isn’t something to aspire to because your kids probably aren’t going to college. Universities are mostly the preserve of the middle class and above, and everyone in the lower half of the income spectrum knows it. And those good jobs available to high school grads? There’s not so many of those anymore. And to top it all off, these days there really is a steady drumbeat from the Tom Friedmans of the world suggesting that America is doomed to be a global loser unless we all start upping our game and cranking out a lot more PhDs and college graduates. Obama himself may not be saying that explicitly, but he’s part of an elite consensus that sure is. It’s hardly any wonder that the working class feels besieged on all fronts lately.

The fact that Santorum is turning this into an attack on Obama is just campaign politics. No big deal, really. But the sentiment he’s expressing here is real, and it’s one we’ve heard more often from the left than the right in the past. Needless to say, I could do without Santorum’s loopy stuff about Obama supporting college because it destroys religious faith (also not true, by the way), but the alienation and stagnation of the working class is real, and frankly, it’s nice to hear someone on the right acknowledge this in an economic sense, not just the usual culture war sense. We could use more of this.