I sort of watched the Republican debate tonight. That is to say, I did watch it. The TV was on, and my eyes were pointed in the appropriate direction. But I only sort of paid attention. 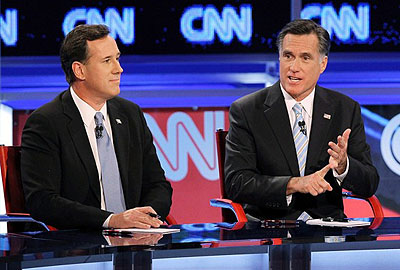 Something tells me I don’t really have to explain why.

Anyway, what this means is that I’m going to outsource my commentary to a pair of Andrews. First, Andrew Sprung:

When the discussion turns to foreign policy, there is nothing these three won’t say to inspire the fear and hatred they think will push themselves past their rivals for the nomination and ultimately tear down Obama. Nothing. Romney says that Obama caved to the Russians — in negotiating a treaty that six former secretaries of state and George H.W. Bush supported as a fit renewal of the START treaty. Santorum asserts that Obama could have made the Green Revolution in Iran a success, when the merest hint of concrete U.S. support for any group in Iran is toxic. Gingrich tells the audience “you live in a world of total warfare” at a time when a lower proportion of humans is dying by violence than ever before in human history. Santorum builds Iran into a global threat of supersoviet proportions. Gingrich justifies a preemptive Israeli strike on Iran — with unstinting U.S. support — purely on the basis of what Israelis might “think” Iran will do if it ever gets a nuclear weapon.

Gingrich, finally, always one to take the crown in demagoguery, delivers the coda: under Obama, “as long as you’re an enemy of America you’re safe.” And Romney, outdone as usual in potency of demagogic phrasing but never behindhand in his will to smear and lie, immediately agrees.

This was pretty much the only part of the debate that really penetrated my weariness. But the reason has more to do with body language and CNN’s directorial decisions than anything the candidates actually said. What struck me was that Romney, Santorum, and Gingrich acted like a trio of bobbleheads whenever the subject was foreign policy. All disagreement suddenly disappeared. Whenever the camera cut away, they were watching attentively, nodding along appreciatively, and all but mouthing “good point” at whatever the speaker was saying. There wasn’t a hair’s breadth of difference between them. The mutual admiration was so total it was almost embarrassing.

Maybe I’ve lost my mind after all these debates, or maybe I secretly want him to win (because he would finally expose all the insanity that has been building in this party and needs venting). But I thought Santorum was on form tonight. My sense is that he will not lose his current momentum after tonight. I didn’t feel Newt tonight. Romney doesn’t wear well. Paul was great and funny and human.

I’m in a state of profound indecision about this. Should I root for Santorum, for exactly this reason? Because he’ll really and truly represent the insanity the Republican Party has descended to, and provide us with a Goldwater moment that might shock them back into sensibility? Or is that juvenile and dangerous? After all, there’s always a chance he could win.

I don’t know. I just don’t know. But it’s hard not to feel that America really needs a long, hard look into the id of the Republican Party, and then needs to decide if that’s where it wants to go. Santorum, even if he has no other redeeming features, at least provides us with that.