Matt Yglesias on the Chrysler Super Bowl ad that seems to have Karl Rove and the right-wing outrage machine in an uproar:

Apparently Clint Eastwood is personally upset that some people took Chrysler’s “halftime in America” to be a positive commentary on the Obama administration.

This seems totally untenable to me. Whether Eastwood or Chrysler executives like to talk about it, the company—currently enjoying double-digit sales growth—would not currently exist today if not for the Obama administration…Whether you like what he did or not, there’s no denying its impact. The automobile 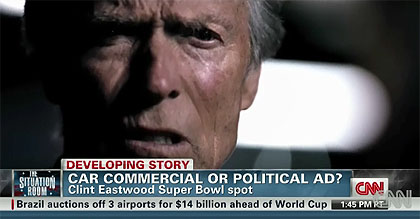 industry of the upper Midwest is still with us specifically because Team Obama chose to ensure that it would remain there.

I don’t get this. It’s yet another one of those things that I see, think nothing of at the time, and then subsequently learn has become a cause celebre.1 To me, this just seemed like an ad for Chrysler, very much in line with their campaign of the entire past year, which revolves around the “comeback” of Motor City and the grit and hard work that made it possible. I don’t know if that’s a good advertising theme or not, but it’s the one they chose.

I have no idea whether Rove really believes Chrysler produced that ad in order to do President Obama a political favor.2 But the fact that he and other Republicans are so worked up could mean that they are scared—not of the advertisement itself, but of the themes it contains.

Those themes are optimism and national pride. As Salon‘s Joan Walsh noted on the Ed Show Monday evening, Republicans have basically owned those themes since the 1980s, when Ronald Reagan won an election with them. But lately President Obama has been the one making the case that it’s morning in America or, at least, just before dawn. He did it in the State of the Union and he’s done it in a series of major speeches since.

…If the recovery continues, Obama will have a pretty powerful claim to reelection: That his economic policy choices, made in the face of fierce Republican opposition, are paying off. Rove knows this as well as anybody. I suspect that’s the real reason he’s so angry.

1For the record, this happens to me nearly as often on the left as on the right.

2Actually, I think we do have a pretty good idea. He doesn’t.