I missed The O’Reilly Factor on Monday — I was probably in the middle of fighting with Expedia over some travel arrangements — but Bob Somerby tells us we missed a good one. Bernie 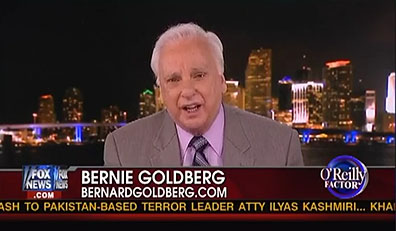 Goldberg, the liberal-turned-conservative who’s a regular guest, had something to say about the conservative campaign to get Ellen DeGeneres fired as a spokesman for JC Penney:

GOLDBERG: There’s something that needs to be said, no matter how uncomfortable it makes some people listening to us. There is a strain of bigotry — and that’s the word I want to use — running through conservative America.

Ellen DeGeneres did nothing wrong. She’s gay. Right? There is — reasonable people may disagree on gay marriage. That’s fine. But to, but to call on somebody’s dismissal to be fired, to lose her job because she’s gay is bigotry. And I don’t care how many people listening to us right now don’t like that.

O’REILLY: Well, I mean, the argument though—

GOLDBERG: Let me say — let me say one other thing briefly, Bill. In the middle of the last century, in the 1950s and 1960s, there was another strain of bigotry on the right, and it was against black people. That has to leave the conservative movement.

I used to be a liberal. I became a conservative because liberals were a little too crazy for me. A lot too crazy for me, actually. But you know what? I am immensely uncomfortable with the bigotry on the right, and I don’t care how many people don’t like it. I am sick of it.

Bob thinks it’s counterproductive to throw around charges of bigotry too casually, and I suppose I agree. At the same time, he was happy to see Goldberg say this on the air, and so am I. That’s because the problem here isn’t so much that there’s a strain of bigotry on the right — there are strains on the left and the center too — but that conservative leaders are too tolerant of it when it wells up and conservative media are too willing to stoke it in order to goose ratings. That’s the real crime, so it’s nice to see Goldberg and O’Reilly call it out. I wish they’d do it more often, but good for them for doing it even occasionally.

Which reminds me: Bob is doing some fundraising for his site right now. I find him a huge pain in the ass on a bunch of levels, and I disagree with him about as often as I agree. That said, I also read him every day because he routinely talks about stuff that no one else on the left pays much attention to. It may not be obvious from my writing, but his site helps keep me honest. He’s worth donating a few dollars to if his stuff is up your alley.