A study that suggests the rich are bigger pricks than the poor got a lot of attention yesterday, and I agree with Tyler Cowen that we should all take it with a bigger grain of salt than we have. I wasn’t wildly impressed with the quality of the results, though some are interesting and suggestive. But what’s up with this?

Let’s view these results in light of the literature as a whole (I haven’t seen any journalistic source do this). Very often in studies the highest trust, lowest corruption societies in the world are the relatively wealthy Nordic countries, 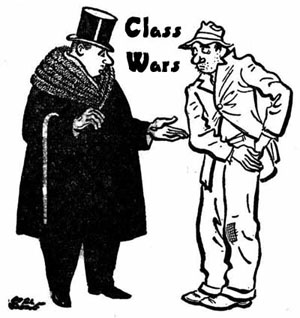 not poor countries. There is plenty of evidence that it is low and falling incomes — not wealth — which helped to explain voter support for fascism. Consumers are eager to buy products from companies such as Apple, and they regard the wealth of the shareholders, and the high profit margins, as a sign they will get a high quality product, not a reason to fear a rip-off.

Wait a second. We all love Apple products because Apple charges wildly high prices for them? Where did that come from? Wal-Mart and McDonald’s are pretty big companies too, and obviously nobody buys from them because of their high margins and wealthy shareholders. We buy from all three companies because they sell highly standardized products/services and have a reputation for being customer-centric.

That said, I agree with Tyler’s advice to read this study carefully. High-status people can afford to take more risks (like breaking traffic laws); they engage in negotiations more routinely and therefore come to consider them mostly amoral exercises; and they’re accustomed to not being questioned — either because they’re surrounded by people who work for them or because they’re surrounded by people who want to sell them stuff. All of this is likely to make them more imperious, more demanding, and more likely to believe they won’t get caught if they cheat (and more likely to get off if they are caught). What’s more, the rich are certainly far more likely to get their way than the poor. All of this is common sense, and it makes us more likely to believe a study that confirms our intuitions about the rich. But the study relied an awful lot on simulations (i.e., games) and on asking people to “imagine” they were upper class. Neither of those necessarily maps well to what real people would do in real situations. Be careful with this one.