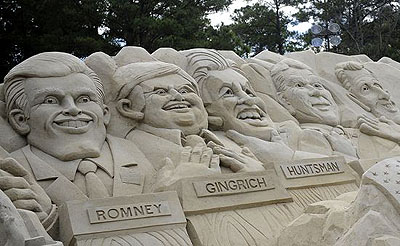 Here are my personal favorites from tonight’s Republican debate:

Ron Paul repeatedly insisting that no one understands his positions.

Newt Gingrich pulling a Pawlenty and not having the guts to really go after Romney to his face about his record at Bain Capital.

Rick Perry declaring that “South Carolina is at war with this federal government.” Maybe not the best imagery to invoke in a debate being held 50 miles down the road from Fort Sumter, my friend.

Newt Gingrich suggesting that Andrew Jackson is a great role model for the use of military force.

Mitt Romney seemingly having no clue that someone might ask him about his income tax returns, leading to this astonishingly weaselly reply:

You know, I looked at what has been done in campaigns in the past with Senator McCain and President George W. Bush and others. They have tended to release tax records in April or tax season. I hadn’t planned on releasing tax records because the law requires us to release all of our assets, all the things we own. That I have already released. It’s a pretty full disclosure. But, you know, if that’s been the tradition and I’m not opposed to doing that, time will tell. But I anticipate that most likely I am going to get asked to do that around the April time period and I’ll keep that open….I think I’ve heard enough from folks saying, look, let’s see your tax records. I have nothing in them that suggests there’s any problem and I’m happy to do so. I sort of feel like we are showing a lot of exposure at this point. And if I become our nominee, and what’s happened in history is people have released them in about April of the coming year and that’s probably what I would do.

Translation: I’m not going to release my tax records in time for any primary voters to see them. However, I might release them after the primaries are over but early enough that they’ll be old news long before the general election. Then again, maybe I won’t release them at all. In the meantime, I’m going to pretend that this is the first I’ve ever heard about this peculiar “tradition” you earthlings apparently have.

Full confession: these are my favorite bits because that’s about all I heard of the debate. If I’d watched more of it, I’d probably have more favorites.