The New Republic has a roundtable today on the most overlooked stories of 2011, and most of them are on the same dreary topics that get overlooked every year: Iraq, immigration, Turkey, the economy, etc. etc. Yawn. But John Judis nails the real winner:

John Judis: The Subversion of the Do Not Call Registry

The great under- or, better, un-covered story of the year: Cardholder Services and the Do Not Call Registry. You don’t know what I’m talking about? That’s because you don’t work at home. George W. Bush’s administration invaded Iraq and let Bernie Madoff run wild; but to its credit, it established the Do Not Call Registry to block telemarketers from flooding our telephones with unwanted offers. After I registered my phone number on the Federal Trade Commission’s web site in 2004, the phone calls virtually stopped.

But guess what? Under the Obama administration, which claims to understand the power and wisdom of government regulation, they’ve begun again. I get seven or eight a day now (mostly I don’t answer them), including to my cell phone, where I get charged for them. Many of them have been from an outfit called “Cardholder Services.” And it’s not just me. Google “cardholder services” and you’ll find a plethora of complaints. I have already filed complaints with the FTC twice this year, and the second time I asked for an acknowledgement. But I never heard back, and the phone calls continue. A little while ago, I got a call on my cellphone from a number in 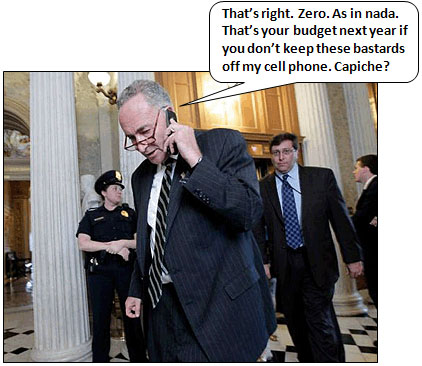 Salem, Oregon. 503-902-8252. Complaints about this number are all over the web. So the Obama administration has not followed through on the one thing that the Bush administration did right.

I get these calls too, but luckily I have a solution! Remember a couple of years ago when you used to get three or four robocalls a day offering you a chance to extend your auto warranty? It was pretty annoying. But the FTC finally put these scammers out of business. I’ll let the Wall Street Journal explain how it happened:

The Federal Trade Commission filed complaints on Thursday against two companies that were behind an automated telemarketing campaign that enraged Senator Charles E. Schumer and, authorities say, deceived thousands of people across the country.

Mr. Schumer, Democrat of New York, was in a meeting on Capitol Hill last week when he picked up his cellphone, triggering a phony, prerecorded sales pitch, ostensibly for an extended vehicle warranty.

Irate, Mr. Schumer became one of an estimated 30,000 Americans to make complaints about the robocalls with consumer protection authorities. He held a press conference to rail against the “robo-dialed harassment.”

Did you get that? 30,000 Americans had already complained about these calls and the FTC did bupkis. They obviously Do Not Care about ordinary non-powerful Americans like you and me and 29,998 others.

But then Chuck Schumer got one call on his cell phone, called a press conference, and probably threatened the FTC with complete defunding if they didn’t shut down the bastards tomorrow. And guess what? The FTC shut the bastards down.

The moral of the story here is that the FTC may not care about us ordinary schlubs, but they do care about pissed-off senators. So I recommend that Judis make a recording of the Cardholder Services robocall, get the private cell phone number of some senator (he must have contacts that can help him with this), and then call the senator and play back the call. Voila! A high-level complaint will be registered from one of the princes of Washington, and the FTC will spring into action.

You may thank me later.