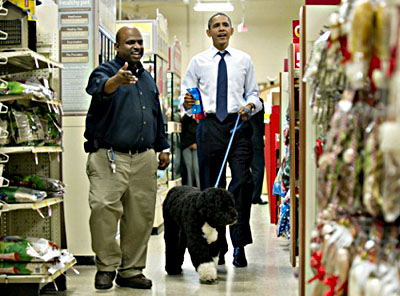 I get that a blog post is just a blog post. And sometimes blog posts are nothing more than water cooler blather. But this post from Shannon Coffin perfectly encapsulates the deranged Obama hatred currently consuming the American right:

Now, this may not be the biggest story of the year, and in all likelihood, it probably isn’t even true.  But did the President really order the first dog back from Hawaii to the White House to be a prop for a Petsmart photo op? According to a report, Bo (a dog whose name is an acronym for his owner — coincidence?) [actually, yes: just coincidence –ed.] was spotted one day in Hawaii, where Mrs. Obama had gone for vacation in advance of her husband, and in a “regular guy at the pet store” photo op with Mr. Obama in Virginia the next.

Now, granted, this could be accomplished with no cost to the taxpayer, if Air Force Two (which would have flown Mrs. Obama to Hawaii) was returning home to Andrews AFB anyway.  And reports of Bo (the dog, not the President) being in Hawaii could very well prove false, thus mooting Bo-gate as an election year political scandal. But let’s say it is true. Really, Mr. President? And shouldn’t some advance staffer be fired for letting the dog get on the plane in the first place?

So let me get this straight. First, we don’t even know if this is true. Second, even if it is true, it didn’t cost taxpayers anything. Nevertheless, someone should be fired over it.

I recommend Obama go on TV and give the following speech:

Republican leaders have not been content with attacks on me, or my wife. No, not content with that, they now include my little dog, Bo. Well, of course, I don’t resent attacks, and my family don’t resent attacks — but Bo does resent them. You know, Bo is Portuguese, and being a Portuguese water dog, as soon as he learned that the Republican fiction writers in Congress and out had concocted a story that I’d left him behind on a Hawaiian island and had sent a 747 back to find him — at a cost to the taxpayers of two or three, or eight or 20 million dollars — his Iberian soul was furious. He has not been the same dog since. I am accustomed to hearing malicious falsehoods about myself — such as that old, worm-eaten chestnut that I’m constantly apologizing for America. But I think I have a right to resent, to object, to libelous statements about my dog!

What do you think? Pretty good, huh?

UPDATE: Guess what? Bo was never in Hawaii in the first place! Imagine that.

At least, that’s what the liar-in-chief says, anyway. I suppose most of my lefty readership will be gullible enough to believe him.