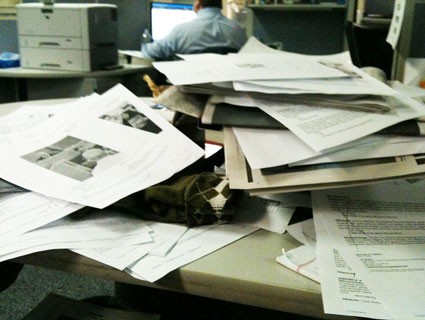 The “Volcker rule” is a simple thing. Basically, it says that if you’re a bank that takes deposits and benefits from federal deposit insurance, you can’t also make risky trades that might blow up your bank and cost the taxpayers a bundle. Wall Street never liked the rule, because banks make a lot of their money these days trading for their own accounts and didn’t want their trading profits cut off. They fought the idea in Congress, but in the end, the Dodd-Frank bill that passed in 2010 included a version of the Volcker rule in its final draft.

Was this a victory for common sense? Hardly. Last month regulators unveiled their first take on the actual implementation of the Volcker rule, and it had become a monster. “Only in today’s regulatory climate could such a simple idea become so complex, generating a rule whose preamble alone is 215 pages, with 381 footnotes to boot,” complained American Bankers Association Chief Executive Frank Keating.

Poor banks! But step back for a moment. How did Paul Volcker’s baby get so bloated? Keating’s crocodile tears aside, the answer is: banks. When it comes to financial regulation, fighting against new laws is merely their first line of defense. When they lose, as they did in the Dodd-Frank battle, the action simply moves to the regulatory agency charged with implementing the law. James Stewart explains what happened next:

When the proposed regulations for the Volcker Rule finally emerged for public comment, the text had swelled to 298 pages and was accompanied by more than 1,300 questions about 400 topics.

…”Here’s the key word in the rules: ‘exemption,'” former Senator Ted Kaufman, Democrat of Delaware, told me. “Let me tell you, as soon as you see that, it’s pronounced ‘loophole.’ That’s what it means in English.” Mr. Kaufman, now teaching at Duke University School of Law, earlier proposed a tougher version of the Volcker Rule, which was voted down in the Senate. “We’ve been through this before,” he said. “I know these folks, these Wall Street guys. I went to school with them. They’re smart as hell. You give them the smallest little hole, and they’ll run through it.”

But businesses don’t like simple rules, because simple rules are hard to evade. So they lobby endlessly for exemptions both big and small. This is why we end up with tax subsidies for bow-and-arrow makers. It’s why we end up with environmental rules that treat a hundred different industries a hundred different ways. It’s why financial regulators don’t enact simple leverage rules or place firm asset caps on firm size. Those would be hard to get around and might genuinely eat into bank profits. Complex rules, conversely, are the meat and drink of $500-per-hour lawyers and whiz kid engineers. If the rules are complicated enough, smart lawyers can always find ways around them. And American corporations employ lots of smart lawyers.

Keep this firmly in mind the next time you hear someone from the Chamber of Commerce complaining about how many thousands of pages of regulations they have to comply with. Some of that is inevitable: We live in a complex world, and that means the rules are sometimes complex too. But they don’t have to be anywhere near as complex as they end up being. We could have a simple tax code, simple environment rules, and blunt financial regulations. We could probably cut the size of agency regulations by 10 times if we wanted to.

But businesses don’t want to. Sure, they’d prefer no regulation at all, but they know that’s not in the cards. So in public they bemoan complexity, but in private they fight endlessly for more of it. To their lawyers, every single extra page is an extra opportunity to make more money.