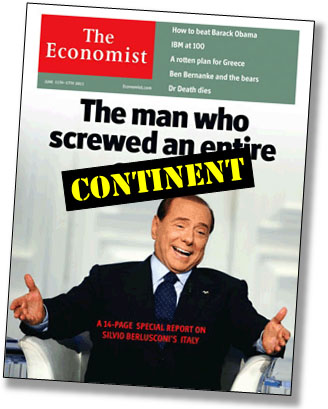 Ryan Avent gazes bleakly across the Atlantic at Italy, and sees only a yawning abyss gazing back at him:

I have been examining and re-examining the situation, trying to find the potential happy ending. It isn’t there. The euro zone is in a death spiral. Markets are abandoning the periphery, including Italy, which is the world’s eighth largest economy and third largest bond market. This is triggering margin calls and leading banks to pull credit from the European market. This, in turn, is damaging the European economy, which is already being squeezed by the austerity programmes adopted in every large euro-zone economy. A weakening economy will damage revenues, undermining efforts at fiscal consolidation, further driving away investors and potentially triggering more austerity. The cycle will continue until something breaks. Eventually, one economy or another will face a true bank run and severe capital flight and will be forced to adopt capital controls. At that point, it will effectively be out of the euro area. What happens next isn’t clear, but it’s unlikely to be pretty.

….I hate to get this pessimistic about the situation. It feels panicky and overwrought. I can’t believe that Europe would allow so damaging an outcome as a financial collapse and break-up to occur. And I still don’t understand why, if this is all as obvious as it seems to me, equities aren’t down 20% now, rather than 2% or 3%. But the window within which something could be done to prevent it is closing, and fast. I hope to be proven astoundingly wrong in my assessment, but I’m struggling to see alternative outcomes.

Megan McArdle, after pondering the contradictions of democracy, comes to the same conclusion. Because any plausible solution to Europe’s problems must necessarily be hugely unfair to someone, no solution will be forthcoming and our Creditanstalt moment might be imminent:

I used to write about developing countries a fair amount. Time and again they would make these bizarre and pointless moves, like suddenly and for no apparent reason defaulting on a bunch of debt….And the other journalists and I would cluck our tongues and say “Why can’t they do the right thing when it’s so . . . bleeding . . . obvious?”

Then we had our own financial crisis and it became suddenly, vividly clear: democratic governments cannot do even obvious right things if the public will not tolerate it. Even dictators have interest groups whose support they must buy.

This has come home to me forcefully several times over the last few years, but never more than now….I am very much afraid that the euro zone is about to plunge us into phase two of the global financial crisis–and that as with the Great Depression, phase two may be even worse than the dismal years we’ve just endured. In search of fairness, we may all get a lot more justice than any of us really wants.

I am, oddly enough, not quite this pessimistic yet. I say “oddly” because I pretty much agree with these assessments and I’m a naturally pessimistic person in the first place. But I still think that, at the 11th hour and 59th minute, when the depth and malignancy of the abyss really and truly sinks in, Europe’s leaders will finally do what needs to be done. Not willingly, maybe not even legally, but they’ll do it.

I am, however, less sure of this than I used to be. Instead of a 90% chance of this being the eventual outcome, I’d now put it at maybe 60%. Maybe.