Via Stephanie Mencimer, Christopher Conover at the conservative American Enterprise Institute recently highlighted a well-known fact: in any given year, 1% of the population accounts for a fifth of all healthcare spending and 5% accounts for nearly half of all spending:

We have become so accustomed to health coverage that functions as prepaid healthcare rather than as insurance against unknown risks that this distinction escapes many people (including policymakers). In a perfect world, we would have universal coverage against the risk of landing in the health spending 1 percent. Most people would gladly pay $1,161 to avoid facing bills of $116,000. But not everyone can afford to do so. …[This is] why one Republican presidential candidate observed, a half decade ago, that “Health is about 30 times more difficult than national security.” Perhaps it’s worth having a Republican presidential candidate debate on this issue alone.

Yes, perhaps it is. 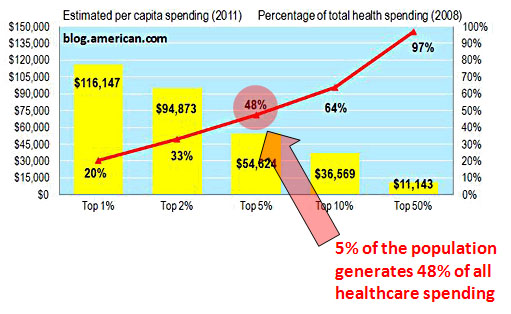