As the supercommittee slouches toward its inevitable doom, Republicans are setting the table to renege on the deal they signed up for this summer. If the committee fails to come up with a plan, and the automatic cuts to 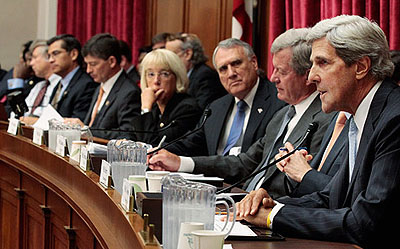 domestic and defense spending are triggered, well, they’ll just have to go back to the table and eliminate the defense cuts. Dave Weigel explains the all-too-obvious next step:

This isn’t how it’s supposed to work. The cuts are supposed to be stupid. They’re so stupid that everyone will be forced to the table, lest they be responsible for taking a Sam Raimi chainsaw to the defense budget and Medicaid. The correct answer to Kudlow etc is some version of “Well, we’re not going to fail, because if we do we will have to pass these triggers.” Instead, Republicans are talking about rejiggering the triggers, which would set up a fight on defense spending, which Democrats would be hard pressed to win when they don’t control the House and when 21 of their senators are vulnerable to truth-remixing Crossroads GPS ads about how they literally pried guns out of the hands of soldiers. Best case scenario: This is a GOP negotiating tactic. Worst case scenario?

The trigger is supposed to be $600 billion in domestic cuts and $600 billion in defense cuts. But how many Democrats will be willing to stick to their guns and allow the Pentagon cuts to go forward if the supercommittee fails? Not enough, probably, and Republicans know it. What’s more, they’ve always known it, which is why they’ve never taken the trigger seriously. Reneging on this summer’s deal was baked into the cake from the day it was proposed.

This is, after all, a party that was willing to allow the United States to default on its debt in order to get its way. To a party like that, a deal is just a meaningless piece of paper. It’s unlikely that Democrats have the spine to deal with that kind of attitude — they certainly haven’t up to now — which means they’ll probably give in on domestic spending.

Alternatively, Congress will do what it does best: it will resort to budget gimmicks, pat itself on the back, and head home for the holidays. Given the alternatives, that actually might be the best possible outcome.