Every Republican candidate has sworn that repealing Obamacare will be his or her very first item of business once Obama himself is booted from the Oval Office. Last night, Mitt Romney got a little more specific: On Day 1, he said, he’d issue a waiver from Obamacare for all 50 states, and on Day 2 he’d repeal the whole enchilada via a reconciliation bill, which requires only 51 votes and can’t be filibustered.

Sounds great! (Assuming Republicans take control of the Senate, of course.) But would it work? Well, reconciliation can only be used on things that affect the budget, so there’s a lot of Obamacare that could indeed be repealed that way. But not quite all. You see, one part of the bill establishes what’s called “community rating,” which means that health insurers are required to take on all comers and are required to charge them all the same price. This is a godsend for really sick people, who will sign up in droves for health insurance, but not so great for the insurance companies that have to shell out big bucks to keep them healthy.

Crucially, though, this is a regulation that’s not budget related. This is why the main healthcare bill was passed via regular order, not reconciliation, and it’s why it can’t be completely repealed via reconciliation either. And while insurers don’t like 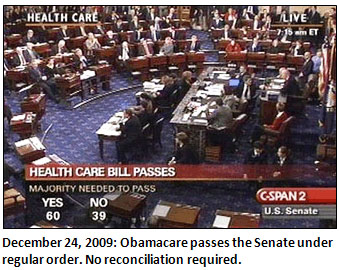 community rating much, they were willing to accept it as long as everyone, not just the sick, was subsidized by the government and required to get insurance. Jon Chait explains the real-life choices Republicans will have once this becomes clear:

If they eliminate the subsidies but leave the regulations in place, you’ll have insurers required to sell policies to people who are sick, but no way to bring healthy people into the risk pool. A few states tried that. It created a cost spiral that collapsed the whole market. Romney would end up screwing the health insurance industry, which is much harder to do, politically, than screwing the uninsured. The industry has lobbyists.

So things aren’t so simple. Unless Republicans get rid of the filibuster, they can damage Obamacare but they can’t kill it completely. And health insurers, who know perfectly well that repealing the mandate and the subsidies while leaving community rating in place would destroy them, will make their position perfectly clear. For them, repeal is an all or nothing affair.

Obviously, Romney and the other GOP candidates aren’t eager to acknowledge this bit of grubby reality. But it’s there, and it’s going to give fits to any Republican who wins the presidency. To me and my fellow radical socialist America haters, of course, avoiding this whole mess and keeping Obamacare intact is a pretty good reason not to elect a Republican president in the first place — quite possibly the best reason at the moment. But even God’s chillun need to acknowledge reality and figure out what their real game plan is going to be if they win next year. Flat out repeal just isn’t in the cards.