So here’s an irony. Stephanie Mencimer reports today that the birther movement has found a new target: GOP wunderkind Marco Rubio, who was born in Florida to Cuban parents:

Birther Charles Kerchner has a blog that was once devoted mostly to Obama, but lately, he’s been on a campaign to illustrate that Rubio is not a natural born citizen, and thus, ineligible to enter the White House. Kerchner’s logic is convoluted—something of a trend among the birther set. He claims that Rubio is actually a Cuban citizen, even though Rubio was born on American soil, in Miami, in 1971. But Rubio’s parents were Cubans, who 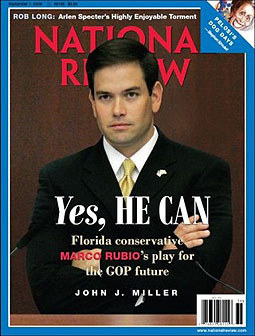 didn’t become US citizens until 1975. (Kerchner went so far as to obtain Rubio’s parents’ naturalization papers from the National Archives to prove his point.)

The birthers may be nuts, but guess what? It turns out that the naturalization papers actually tell an interesting story — just not the one the birthers had in mind. Here’s Manuel Roig-Franzia in the Washington Post today:

During his rise to political prominence, Sen. Marco Rubio (R-Fla.) frequently repeated a compelling version of his family’s history that had special resonance in South Florida. He was the son of exiles, he told audiences, Cuban Americans forced off their beloved island after “a thug,” Fidel Castro, took power. But a review of documents — including naturalization papers and other official records — reveals that Rubio’s dramatic account of his family saga embellishes the facts. The documents show that Rubio’s parents came to the United States and were admitted for permanent residence more than 2½ years before Castro’s forces overthrew the Cuban government and took power on New Year’s Day 1959.

Rubio [] mentions his parents in the second sentence of the official biography on his Senate Web site. It says Mario and Oriales Rubio “came to America following Fidel Castro’s takeover.” And the 40-year-old senator with the boyish smile and prom-king good looks has drawn on the power of that claim to entrance audiences captivated by the rhetorical skills of one of the more dynamic stump speakers in modern American politics.

I’m not going to pretend that I’m especially outraged by this, although Rubio’s explanation is pretty lame. (“I’m going off the oral history of my family,” he said. “All of these documents and passports are not things that I carried around with me.” Uh huh.) But the irony is that for years conservatives hoped that even if the birthers were wrong about Obama, perhaps his long-form birth certificate really was hiding something that was a little embarrassing. But no. It was all totally normal. Instead, it turned out to be tea party hero Marco Rubio who had something in his vital records that he’d just as soon have kept quiet. It’s quite the Frankenstein’s monster they’ve created over in crazyland, isn’t it?