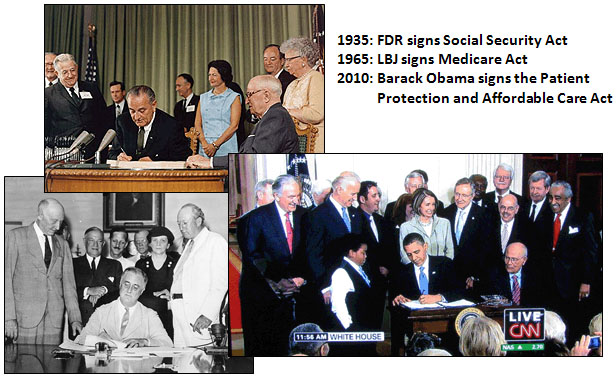 This isn’t exactly big news or anything, but the Los Angeles Times reports today on just how much of a litmus test repeal of Obamacare has become for Republican activists:

Republican activists, increasingly optimistic they can win the White House and Senate next year, are beginning to lay the groundwork for a multi-pronged campaign in 2013 to roll back President Obama’s sweeping healthcare overhaul. The push includes an effort to pressure Republican candidates to commit to using every available tool to fully repeal the law, a tactic pioneered by conservative activist Grover Norquist, who made an anti-tax pledge de rigeur for GOP politicians.

…Some activists are so concerned that Republicans will miss their chance that they are trying to lock GOP candidates into using a controversial parliamentary tactic known as budget reconciliation to circumvent Senate Democratic opposition to repeal. “This needs to be a threshold question for both presidential and Senate candidates,” said Michael Needham, head of Heritage Action for America, an advocacy group affiliated with the Heritage Foundation that supports many tea party positions.

I’ve been trying to think whether anything like this has really happened before. Has repeal of a major new law ever been the subject of such a feeding frenzy during a presidential campaign? There have always been small blocs that were dedicated to repeal of, say, Social Security or Medicare or the ADA, but I can’t remember such a position ever being front and center for an entire party as its top concern.

A lot of progressives were pretty unhappy that the Patient Protection and Affordable Care Act ended up so watered down before it passed. There was no public option! For that reason and others, enthusiasm among the Democratic base for Obama’s reelection is pretty muted right now. But my guess is that it won’t stay that way: Once Republicans have an actual candidate nominated, the lefty base will find its outrage again. I sure hope so, anyway.

Because watered down or not, Obamacare is our best hope for national health care anytime in the next decade or two. It’s not nearly as bad as its critics think, and in any case, it’s something that can be built on. But if it’s repealed? Then you can say sayonara to health care reform for at least a decade, and probably more. At a minimum, nothing serious will happen until we have a Democratic president and something close to a filibuster-proof majority in the Senate again. I’d put that at 20 years away.

That’s really what the 2012 election is about. All the shouting aside, neither party is going to end up doing anything very different about the economy. Nor is there really all that big a difference between the parties on foreign policy these days. No, the single biggest accomplishment of the past decade has been the passage of Obamacare, and the single biggest difference between the parties going forward is whether or not it gets repealed, ending health care reform for another decade or two. In the end, that might not be enough to get the liberal base fired up, but it should be.