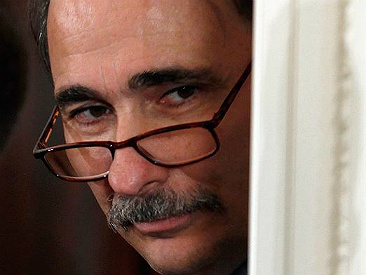 Via Greg Sargent, here is Obama messaging guru David Axelrod on CNN yesterday talking about Republican unwillingness to do anything that might help the economy:

They don’t want to cooperate. They don’t want to help. Even on measures to help the economy that they traditionally have supported before, like a payroll tax cut, like infrastructure, rebuilding our roads and bridges and surface transport. These — so you have to ask a question, are they willing to tear down the economy in order to tear down the president or are they going to cooperate?

So far, various surrogates and Democratic members of Congress have said things like this, but neither Obama nor anyone close to him has gone there. But maybe he should. Here are the famously moderate Norm Ornstein and Thomas Mann:

It was perfectly understandable for Obama to try to deliver on his promise of a post-partisan Washington, even if he was naïve at best, disingenuous at worst. But by doing so he paid a tremendous political price….What sense does it make for Obama embrace an agenda without any support on the other side of the aisle, and make nice to a party whose sole objective is to deny him reelection? One should note the reaction, documented by Politico, of a key Republican Senate leadership staffer to Obama’s endorsement of the Gang of Six deficit-reduction framework in July—if Obama is for it, we have to be against it.

Moreover, if there is any hope of achieving bipartisan policy success, it will come from Republicans believing that blocking the president’s initiatives or offers will cause them political harm. Mitch McConnell admitted as much when he acceded to a deal on the debt limit—not because it would avert economic chaos, not because a conciliatory president offered it to him, but because, in his own words, the failure to do so would damage “the Republican brand.” In other words, Obama’s new approach of turning up the heat—by calling out Republicans for their obstruction and their opposition even to ideas they have previously embraced, like a continuing payroll tax cut—actually has more chance of achieving the policy outcomes Brooks wants than his conciliatory approach.

When surrogates and politicos trade charges, it’s just grist for he-said-she-said gossip journalism. It doesn’t get serious until and unless the president says it. Then it suddenly becomes the topic du jour: the subject of 24/7 cable net coverage, lengthy “analysis” pieces trying to determine if Republicans really do want to wreck the economy, and endless ink on the op-ed page. The result, of course, is that Republicans will have to spend several weeks denying that they want to tank the economy.

I think that would be fun. I would be very happy to see Republicans forced to spend the next several weeks denying that. They’re already feeling the heat on this. Maybe it’s time for Obama to bring them into the kitchen.