Is the Obama White House a testosterone-fueled boys club? Probably. As near as I can tell, pretty much all White Houses are. This kind of stuff is hard to change, but one way it does change is when one of the boys suddenly has an epiphany. Here is Ron Suskind describing Larry Summers’ epiphany in late 2009 as the Obama economic team was trying to figure out 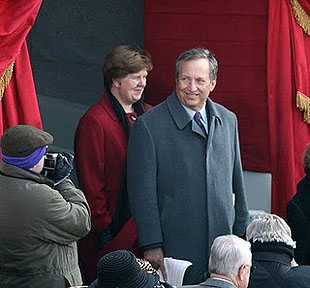 ways to squeeze a bit better performance out of the economy:

[Christina] Romer, in meeting after meeting, came back with new plans, new ways either to locate $100 billion or to pitch it to Congress. Her appeals were passionate. She said they were falling into a “the perfect is the enemy of the good” trap. “It’s about doing something, anything.”

In November, as Obama’s political capital began to wane, he took [Peter] Orszag’s position at a briefing, reiterating the OMB chief’s view that a small stimulus would be ineffective.

“That is oh so wrong,” Romer blurted out, surprising herself, and everyone in the room, with her candor.

“It’s not just wrong, it’s oh so wrong?” Obama queried before launching into an unchracteristic tirade. “Enough!” he shouted. “I said it before, I’ll say it again. It’s not going to happen. We can’t go back to Congress again. We just can’t!”

….A few weeks later the economic team was back to the discussion of stimulus versus deficit reduction….Now Summers stepped up, offering, almost word for word, the position Romer had voiced previously. This time Obama listened respectfully: “I know you’ve got to make the argument, Larry, but I just don’t think we can do it.”

As they left the meeting, Romer—who was happy to have Summers speak for a small stimulus rather than leaving it all to her—said, “Larry, I don’t think I’ve ever liked you so much.”

“Don’t worry,” he quipped. “I’m sure the feeling will pass.” But then something dawned on Summers, who’d never seemed sympathetic to the women’s complaints: “You know, he sure was a lot more generous with me than he was with you.”

It was an important moment. “That was the turning point,” Romer said later. “After that, [Larry and I] really started to have a decent working relationship.”

It’s never possible to draw broad conclusions from a single anecdote. Romer, after all, was pressing her case in “meeting after meeting,” and sometimes that can get tiresome when you know the boss has already made a decision. Alternately, maybe Obama had just had a bad day arguing with the Pentagon over Afghanistan earlier in the morning and his temper was frayed. Who knows?

But probably Summers was right. He probably did say the exact same thing as Romer, and he probably was treated better. At a guess, I’d say there isn’t a woman alive who’s attended a corporate meeting that hasn’t seen this exact same dynamic play out. But no matter how many times you hear about this, there’s nothing like the light bulb coming on over your head and finally feeling it in your bones. Apparently that’s what happened to Summers that day.

That said, here’s some advice for the men reading this: just STFU once in a while and listen instead, will you? It’s surprisingly hard! But if you try, you can do it.