I got sucked into a regulatory vortex today. It’s way down in some weeds that most of you don’t care about, but let me tell you about it anyway. It’s instructive.

I don’t remember now where I first saw this, but apparently the conservative community is in an uproar over proposed new rules that would classify farm equipment as commercial vehicles, thus requiring farmers to get commercial drivers licenses, keep detailed logs, submit to periodic drug testing, etc. etc. It would be expensive and annoying and farmers don’t like it. Just another example of the overbearing Obama administration regulating us to death. 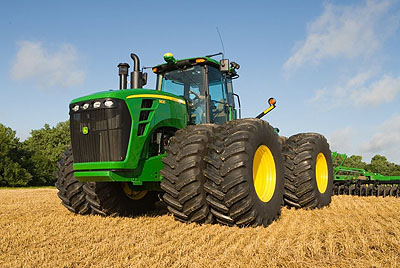 But here’s what’s weird: the first two items don’t propose any new rules at all. They’re solely asking for comment. The third item is a proposed new rule, but the wording suggests that FMCSA is trying to loosen regulations, not tighten them. And yet, a Google search came up with lots of people opposed to the “new rules” and precisely no one who seemed to be in favor. So what’s up?

Finally I figured it out. After reading through a blog post about all this, followed by lots of outraged comments (“What else can you possibily find to TAX!!!” etc. etc.), I found an actual substantive explanation of what’s going on from Adam Nielsen of the Illinois Farm Bureau. Here’s how this all got started:

The issue facing us today surfaced in Illinois when State Police auditors conducting new entrant safety audits for Illinois Department of Transportation suddenly began treating farmers with “crop-share” leases as commercial “for-hire” truckers for the purposes of enforcing federal motor carrier safety rules….At the same time, state auditors began designating “implements of husbandry” as commercial vehicles resulting in a double whammy of enforcement never seen before in Illinois and forcing many farmers to be out of compliance.

So the problem was that state officials in Illinois had suddenly created a bunch of new rules. The Illinois Farm Bureau was unhappy, so they paid a call on the FMCSA:

At our first meeting at U.S. DOT in early March, FMCSA administrator Anne Ferro pledged to review the issue and get back to us quickly with answers. We were pleased when an immediate moratorium on new entrant audits in Illinois was imposed. At our meeting, Administrator Ferro also told us that she was motivated to begin building a ongoing dialogue with the agriculture industry and help her staff gain a better understanding of the movement of agricultural products and equipment. Our D.C. meeting was followed a few weeks later by a large meeting in Springfield with state and federal motor carrier regulators.

….The current Federal Register request for comments is NOT a rule making. It simply asks farm organizations, farmers, and the public for feedback on the agency’s current long standing interpretations.

So here’s what seems to have happened. The FMCSA has long had rules that defined most grain haulage as interstate commerce and designated farmers hauling shared crops as commercial operators. This was never a big deal because they had never enforced those rules and neither had anyone else. But then Illinois decided to start enforcing the letter of the law and Illinois farmers were unhappy. So now FMCSA is asking whether these regulations ever made sense in the first place. Ditto for implements of husbandry, where they say that “a narrowly literal reading would mean applying the rules in circumstances where they would be impractical and produce no discernible safety benefits.” So they want to make sure that the rules are more practical.

I might still be missing something here. Figuring out what’s really going on just by reading rulemaking bureaucratese isn’t easy. But it looks like the outrage over this is yet another example of Obama Derangement Syndrome in action. Far from trying to implement a barrage of regulations on our nation’s farmers, FMCSA is apparently trying to stop state officials from implementing a barrage of regulations on our nation’s farmers. But something tells me this doesn’t matter. ODS is strong, and I imagine this is all going to be part of conservative lore for years. After all, everyone knows that liberals just love writing reams of pointless new regulations on hardworking small business owners. Right?