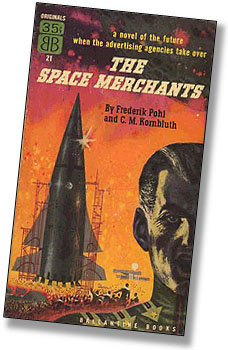 Nearly every day I find myself thinking that we’re slipping closer and closer to the dystopian marketing world that was mere satire half a century ago in The Space Merchants.1Here’s the LA Times today:

Picture this: You stop in front of a digital advertising display at a mall and suddenly an ad pops up touting makeup, followed by one for shoes and then one for butter pecan ice cream. It seems to know you’re a woman in your late 20s and, in fact, it does. When you looked at the display, it scanned your facial features and tailored its messages to you.

….Kraft said it’s in talks with a supermarket chain, which it would not identify, to test face-scanning kiosks. “If it recognizes that there is a female between 25 to 29 standing there, it may surmise that you are more likely to have minor children at home and give suggestions on how to spice up Kraft Macaroni & Cheese for the kids,” said Donald King, the company’s vice president of retail experience.2

What’s most unnerving about this to me isn’t the technology itself, which is inevitable. It’s not even the obvious next step beyond just age and gender targeting, which has been common practice forever. It’s the fact that I know most people don’t even object to this. It’s just a better way of making sure that you only see ads for stuff you’re interested in, after all. And what’s wrong with that? We’re busy people, you know.

But I am a dinosaur and I already dislike the fact that virtually every major chain store — and really, what other kind of store is there these days? — demands that I pay an artificially jacked up price unless I agree to let them maintain a database of every item I’ve ever bought from them. They’ve fooled most of their customers into believing that this is actually a discount program, but I remain a heretic on this score. I’m decidedly unexcited by the prospect of every marketing broker in the country having access to my lifetime purchasing history for a small fee. And I’m even more decidedly unexcited by the prospect of this purchasing history following me around from POS display to POS display wherever I go.

But I’m losing this war and I know it. I’m rich enough that I can afford to refuse to play just out of sheer cantankerousness, but most people can’t. They just can’t afford to pay 10% more for everything they buy as the price of a bit of privacy. I only wish that all these people at least felt aggrieved about this state of affairs instead of being cheerfully convinced that it’s all being done for their glorious benefit by the generous and civic-minded purveyors of America’s retail emporia.

1Double criminally left off NPR’s list of the 100 best SF and fantasy books. (“Double” because not only is it a great book, but it kills two birds with one stone by getting both Fred Pohl and Cyril Kornbluth onto the list.)