On the campaign trail this weekend, Rick Perry was bragging about the medical malpractice reform that Texas adopted a few years ago. That’s something we can expect to hear a lot more about, so here’s a little story from a piece I wrote in 2007 at the Washington Monthly:

Like many Texans, Alvin Berry voted Yes on Proposition 12, a 2003 initiative that limited pain and suffering damages in medical malpractice suits. “I think there are too many frivolous lawsuits,” he told Texas Monthly reporter Mimi Swartz.

But then Berry suffered some malpractice of his own: a doctor who ignored a set of plainly dangerous lab results for months. When the doctor finally ordered a biopsy, he discovered that Berry had prostate cancer that had spread to his bones in 20 places. He gave Berry five years to live.

Unlike Jordan Fogal, Berry had the right to go to court. In theory, anyway. In practice, as his lawyer explained to him, it’s now usually an exercise in futility. Because of the new damage caps, it’s not worth it for lawyers to take anything but the most slam-dunk cases. What’s more, even if you can find a lawyer to represent you, insurance companies have very little incentive to settle since their losses are limited by law. Thus, between court costs, attorneys’ fees, and other expenses, Berry would be lucky to recover $75,000. Maybe not even that much. Given that reality, was he really willing to sign up for two years of litigation? Most people aren’t.

This is the key to damage caps, the worst possible kind of medmal reform because it affects only the biggest, most serious cases of malpractice, not the frivolous little suits. $250,000 may sound like a fair chunk of change, but the fact is that the cost of mounting a case is expensive enough that it’s barely worthwhile for a lawyer to bother. Unless 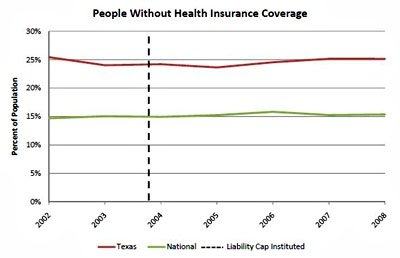 there are also some pretty hefty economic damages — and for retired people there usually aren’t since they don’t have much in the way of lost income to claim — most suits just don’t get filed no matter how justified they are.

But hey — maybe in Texas they’re willing to swallow some tough medicine in order to tackle a big problem. Unfortunately, as Aaron Carroll repeats today, Proposition 12 solved nothing. Malpractice payouts may have gone down, but the extra money seems to have gone mostly into the pockets of insurance companies. The cost of healthcare hasn’t gone down, the cost of healthcare insurance hasn’t gone down, the number of people with healthcare insurance hasn’t gone up, and doctors haven’t come flocking to Texas. Prop 12 has helped insurance companies (who support Republicans) and hurt trial lawyers (who support Democrats), and that’s about it.

But since that what it was really designed for, I guess you’d have to call it a success.

POSTSCRIPT: California, where I live, also has damage caps. In fact, we’ve had them since 1975, so there’s a pretty long baseline of data to judge whether they’ve worked. They haven’t. See here and here for more.