Matt Yglesias is startled by the chart below, which shows the greenhouse gas emissions produced by various kinds of food: “The carbon gap between lamb & beef on the one hand and pork & chicken on the other is larger than the gap between between pork & chicken and vegetarianism.” 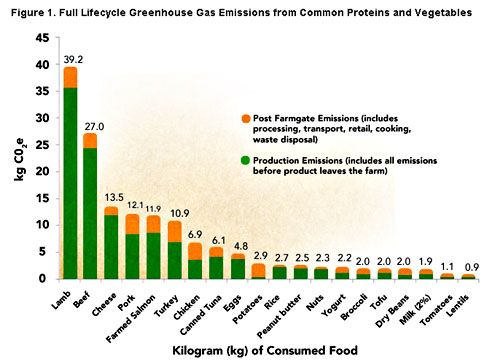 Ezra Klein reposts something from a column he wrote a while back:

Two researchers at the University of Chicago estimated that switching to a vegan diet would have a bigger impact than trading in your gas guzzler for a Prius. A study out of Carnegie Mellon University found that the average American would do less for the planet by switching to a totally local diet than by going vegetarian one day a week….A Montanan who drives 40 miles to work might not have the option to take public transportation. But he or she can probably pull off a veggie stew.

This, of course, highlights the genius of the best answer to all of this: a carbon tax. If you tax carbon, nobody makes these decisions for you. You make them for yourself just by deciding what you want to spend your money on. If a carbon tax increases the price of carbon-intensive activities, some people will prefer giving up their hot rod to going without beef. Some will prefer eating more vegetables to giving up their SUV. Some will end up doing neither and giving up something else. But whatever it is, each individual will reduce his or her carbon use in the way that’s the least personally onerous. No regulation can do that and no PR campaign can do that, but a price on carbon can. And in addition to all the awesomeness of letting the market work its magic to reduce carbon emissions with minimum pain and maximum consumer surplus, it also produces a pot of money that can be used to motivate research into better energy alternatives for everyone. We are almost literally insane for not doing this.