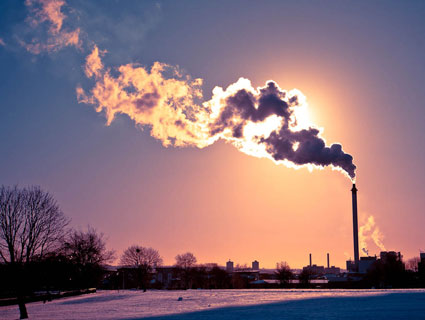 While I was on vacation last week I took a side trip to New Haven to visit Jeff Park, an old high school friend who’s now a geology professor at Yale. We ate some pizza at Frank Pepe, walked around the campus a bit, and then dropped by his office, where he had a stack of reprints of his latest journal article. Take one, he said. Maybe it’ll be good fodder for the blog.

The title is a mouthful: “Geologic constraints on the glacial amplification of Phanerozoic climate sensitivity,” coauthored with Dana Royer. (The Phanerozoic, in case it’s slipped your mind, is the geologic eon spanning approximately the last 500 million years.) Roughly speaking, the article is an updated look at a computer model that estimates how much climate reacts to a doubling of CO2 in the atmosphere.

The model originally concluded that a doubling of CO2 produces a temperature increase just under three degrees Celsius, an estimate that’s in pretty good agreement with other models. So far, so good. But 500 million years is a long time, and several researchers have proposed that climate sensitivity might vary over that period depending on whether or not the earth is in an ice age. So in the new paper, the authors modeled glacial and non-glacial eras separately. And the best fit with the data suggests that climate sensitivity does indeed change depending on glaciation. In fact, during an ice age, the most probable climate sensitivity is six to eight degrees Celsius for a doubling of CO2, more than twice the previous estimate.

Why do we care? As the authors drily put it, “Because the human species lives in a glacial interval of Earth history, this modeling result has more than academic interest.” You see, the most recent ice age in human history is the one that started about 30 million years ago and continues to the present day. We’re living through a glacial interval right now, and that means that a doubling of CO2 in the atmosphere might produce a temperature increase of six to eight degrees Celsius, not the mere three degrees Celsius most commonly estimated.

This is just one model. There are lots of parameters to fit, there are only two glacial intervals to test, and the error bars are fairly large. In other words, it might be wrong. But it’s one more data point in an increasing series of data points suggesting that climate change is worse than we thought—though “worse” is something of an understatement. Six degrees isn’t just a bit warmer here and there; it’s a global catastrophe that would likely produce mass extinctions, dead oceans, large-scale desertification, coastal cities underwater, and billions dead. And unless something changes, we’re well on pace for a doubling of CO2 before the end of the century. Buckle your seat belts.