Jeremy Scahill has a long piece about Somalia in The Nation this week, which includes a charge that the Obama administration is effectively running a black site prison in Mogadishu despite promises two years ago that all the Bush-era black sites had been shut down. The following excerpt is long, but I want to include every passage in Scahill’s piece that relates to the black site charge:

US agents “are here full time,” a senior Somali intelligence official told me. At times, he said, there are as many as thirty of them in Mogadishu, but he stressed that those working with the Somali NSA do not conduct operations; rather, they advise and train Somali agents.

….According to well-connected Somali sources, the CIA is reluctant to deal directly with Somali political leaders, who are regarded by US officials as corrupt and untrustworthy. Instead, the United States has Somali 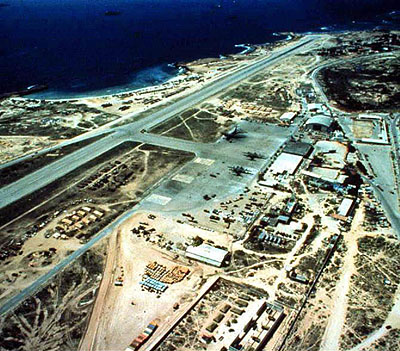 intelligence agents on its payroll. Somali sources with knowledge of the program described the agents as lining up to receive $200 monthly cash payments from Americans.

….According to former detainees, the underground prison, which is staffed by Somali guards, consists of a long corridor lined with filthy small cells infested with bedbugs and mosquitoes….A Somali who was arrested in Mogadishu and taken to the prison told The Nation that he was held in a windowless underground cell. Among the prisoners he met during his time there was a man who held a Western passport (he declined to identify the man’s nationality). Some of the prisoners told him they were picked up in Nairobi and rendered on small aircraft to Mogadishu, where they were handed over to Somali intelligence agents. Once in custody, according to the senior Somali intelligence official and former prisoners, some detainees are freely interrogated by US and French agents. “Our goal is to please our partners, so we get more [out] of them, like any relationship,” said the Somali intelligence official in describing the policy of allowing foreign agents, including from the CIA, to interrogate prisoners.

….Among the men believed to be held in the secret underground prison is Ahmed Abdullahi Hassan, a 25- or 26-year-old Kenyan citizen who disappeared from the congested Somali slum of Eastleigh in Nairobi around July 2009….“Hassan’s abduction from Nairobi and rendition to a secret prison in Somalia bears all the hallmarks of a classic US rendition operation,” [says Clara Gutteridge, a veteran human rights investigator]. The US official interviewed for this article denied the CIA had rendered Hassan but said, “The United States provided information which helped get Hassan—a dangerous terrorist—off the street.”

….Some prisoners, like Hassan, were allegedly rendered from Nairobi, while in other cases, according to Aynte, “the US and other intelligence agencies have notified the Somali intelligence agency that some people, some suspects, people who have been in contact with the leadership of Al Shabab, are on their way to Mogadishu on a [commercial] plane, and to essentially be at the airport for those people. Catch them, interrogate them.”

So what’s going on here? There are roughly three ways the United States can be involved with black sites:

So is this more an example of #2 or #3? There’s no argument from anyone that America has an intelligence presence in Somalia, and no argument that we provide counterterrorism training for Somali intelligence agents. Whether you approve of this or not, it’s a pretty standard part of running the American empire. The two big questions, then, are (a) whether the payoffs to Somali intelligence agents are extensive enough to amount to proxy control of the prison by the United States, and (b) whether the United States routinely renders terror suspects from other countries and turns them over to the Somalis. Unfortunately, based on what’s in Scahill’s story, it’s impossible to say. There’s just not enough evidence.

So I’ll just open this up for conversation. I figure that pretty much every country in this region has a bunch of nasty prisons, and in the regimes that are friendly toward us the CIA probably has periodic access to all of them. What’s more, lots of these friendly regimes receive American aid, American intelligence assistance, and American training of various sorts. So at what point does this morph from squalid, but normal, business to proxy American control of black sites? Comments?