To my mind there are few things that tax intellectual ethics more profoundly than whether the psychotropic debate should be had in public. It is my general feeling that it should not.

My blog is not read by the general public but I will make no attempt to be transparent. Those in the know, know what I am talking about.

Hmmm. I don’t know for sure what Karl is referring to, but I assume he’s talking about the ongoing debate over whether or not psychoactive drugs like antidepressants actually work. There’s a growing body of evidence that they don’t — at least not the way we think they do. Rather, they’re mostly very expensive placebos.

Is this dangerous to talk about in public? Sure, to some extent. After all, relief is relief, regardless of whether it’s caused by a known biologic reaction or by a more mysterious placebo effect. If you had a friend who was taking, say, Prozac, and they reported feeling a lot better, would you take them aside and inform them that research suggests 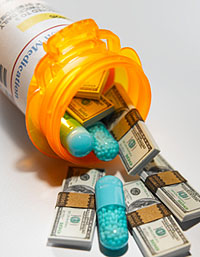 Prozac is nothing more than a complicated sugar pill and their response is probably just a placebo effect? Sure, if you’re an asshole. After all, telling them this has a good chance of making their belief in the drug vanish, and they’ll go back to feeling crappy. Nice work, alleged friend!

But that’s quite a different thing from discussing this as a general topic in public forums. Here’s the problem: there are enormous commercial forces pushing to make sure that we all continue to think these drugs work, and a non-public discussion is almost certain to be far less effective than a public discussion at applying pressure for change. Without public pressure, we’ll get an endless faux-analytic debate in industry circles that’s dominated far more than anyone wants to admit by the financial interests of the drug makers. Their ability to control these debates by selective release of data, financial incentives to researchers and doctors, and sophisticated industry marketing campaigns aimed at physicians, is hardly a secret.

My take on the historical record is that it usually takes public pressure — and plenty of it — to really move the needle on this stuff. There are just too many powerful industry interests fighting to maintain their financial stakes and willing to manufacture endless doubt about results they don’t like. Examples of this are simply legion. So if we want to get to the truth of this — and in the long term, that’s the most helpful thing we can do for everyone — we need to have this debate in public. It’s messy, but the net result will be for the best.