There’s a small boomlet today in blog posts trying to explain what Martin Wolf is saying in his Financial Times column today. If you just want the conclusion, it’s easy: Europe is screwed and no one knows what to do about it. But the details are a little trickier.

Roughly speaking, Europe’s problem is easy to understand. Countries like Greece and Ireland are borrowing huge amounts of money to stay afloat. This money is coming from healthy economies like Germany and France, which aren’t willing to continue loaning vast sums forever. So unless the debtor countries get their finances in order quickly — which seems unlikely — they might eventually be forced to default on their sovereign debt. The problem is that this debt is largely held by banks in healthy countries like Germany and France, and if the weak countries default, those banks are in big trouble. The German and French governments would have to undertake a bank rescue using taxpayer money, so in the end German and French 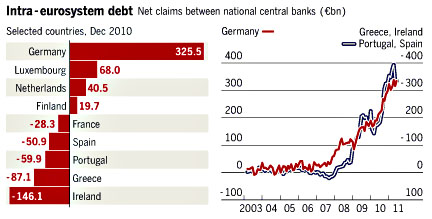 taxpayers will be the ones paying the piper no matter what happens. What’s more, the aftermath of such a default and rescue operation would likely be catastrophic.

Drilling down a bit further and using Greece as an example, what’s happening at an operational level is that the German central bank is withdrawing credit from German commercial banks and loaning that money to Greece. But Wolf, relying on the testimony of Hans-Werner Sinn, president of the Ifo Institute for Economic Research, says that this can’t go on much longer even if we wanted it to:

Prof Sinn makes three [] points. First, this backdoor way of financing debtor countries cannot continue for very long. By shifting so much of the eurozone’s money creation towards indirect finance of deficit countries, the system has had to withdraw credit from commercial banks in creditor countries. Within two years, he states, the latter will have negative credit positions with their national central banks – in other words, be owed money by them. For this reason, these operations will then have to cease.

Paul Krugman describes this as a “slow-motion bank run,” and it doesn’t end well. But restructuring debt in Greece and elsewhere would provoke a bank crisis in Germany, and that in turn would likely produce another financial collapse like 2008. Felix Salmon quotes a Merrill Lynch report:

While volatility is low, correlations are still very high. And that’s a combination which tends to presage nasty price crashes across many asset classes. In other words, markets are exhibiting a lot of fragility right now, and something drastic like a Greek restructuring could easily send them into a Lehman-style downward spiral.

So there’s no answer. As Wolf says:

The eurozone confronts a choice between two intolerable options: either default and partial dissolution or open-ended official support. The existence of this choice proves that an enduring union will at the very least need deeper financial integration and greater fiscal support than was originally envisaged. How will the politics of these choices now play out? I truly have no idea. I wonder whether anybody does.

I don’t wonder at all. I think everyone understands the basic state of play and knows perfectly well that there’s simply no decent solution. Every possible path is catastrophic in one way or another, and it’s human nature to try to avoid a certain doom as long as possible. The fact that waiting just makes it worse hardly matters.