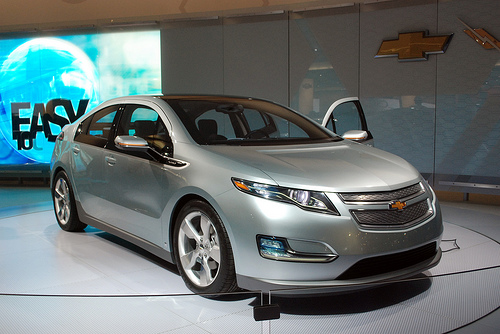 Leading off the New York Times‘ reimagined “Sunday Review” section (no more Letterman jokes?!) was a 2,380-word, mostly fawning essay by columnist Joe Nocera on the promise of the electric hybrid Chevy Volt, General Motors’ great hope for the green car era. Nocera test-drove the car, talked with the sharpest auto analysts and executives, and ultimately declared the car a winner (despite its eye-popping $41,000 price tag).

Nocera contends that the Volt’s success is simply a matter of time and getting drivers behind the wheel. (Fewer than 2,500 have been sold so far.) Here he is driving a Volt around Southampton, New York:

Before I knew it, my miles per gallon for that tankful of gas had hit 80. By the next day it had topped 100. I soon found myself obsessed with increasing my miles per gallon—and avoiding having to buy more gas. Whenever I got home from an errand, I would recharge it, even for a few hours, just to grab a few more miles of range. I was actually in control of how much gas I consumed, and it was a powerful feeling. By the time I gave the car back to General Motors, I had driven 300 miles, without using another drop of gas beyond the original two gallons. I’m not what you’d call a Sierra Club kind of guy, but I have to tell you: I was kind of proud of myself.

When I began to describe for [former GM executive Bob] Lutz the psychological effect the Volt had had on me, he chuckled. “Yeah,” he said, “it’s like playing a video game that is constantly giving you back your score.”

Or as Nocera puts it later on, “The psychological grip it held me in, the smugness I felt as I drove past gas stations, the way it implicitly encouraged me to stick with battery power as much as I could—others are going to feel that as well.” In other words, it’s the “enviro-guilt” (his words) brought on by the Volt that will wean American consumers off of gas-guzzling SUVs and, ideally, off of gasoline-powered cars in general.

I don’t buy the video-game/enviro-guilt theory. Neither, it seems, do the Swiss.

I’m sure many readers—save, perhaps, those hippy-loving liberals out in San Francisco—recoiled in disgust from Rosenthal’s article. Force us off the road? That’s un-American! It’s big government socialism!

But after reading Nocera’s column and the today’s story, I can’t help but think it’s the Swiss, the Germans, and the Danes who’ve got it right. They’re not waiting for the pangs of enviro-guilt to kick in; they’re pushing consumers in the right direction, like it or not.

Of course, if big US cities took a cue from Zurich and began making commuters’ lives even more miserable, the growing pains would be huge. Many cities don’t have nearly enough buses, subways, light-rails, trams, etc., to handle a massive influx of riders; some big cities’ public transit is downright dismal. (Looking at you, Atlanta.) But you know what would spur rapid expansion of public transportation? Thousands of new users pressuring city officials and lawmakers in Washington for better mass transit as if their livelihood depended on it.