“You can’t save Medicare by raising taxes,” says Ezra Klein: 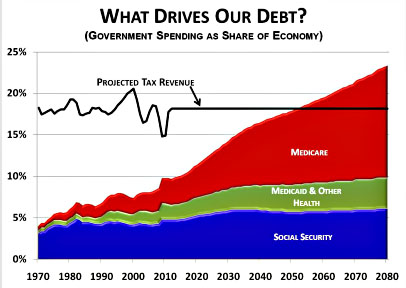 This is true. You can, if you want, save Social Security by raising taxes. That’s because the cost of Social Security is projected to rise for a couple of decades and then plateau at 6% of GDP forever, so one option for saving it is to simply raise payroll taxes to 6% of GDP. Problem solved. You can also save discretionary programs by raising taxes. That’s because discretionary spending has been pretty flat for decades, is projected to remain pretty flat in the decades to come, and can be funded by simply raising enough money to cover that cost. You might not want to do it this way, but it could be done.

But Medicare is different. Its cost trajectory is so steep that it’s impossible to keep raising taxes forever to cover it. At some point, you have to take serious steps to level out those costs. That level will certainly be higher than it is today, since in the future there will be more elderly people to take care of, but it can’t be too much higher.

So how do we rein in that cost growth? Paul Ryan says: don’t bother. Just refuse to pay those rising bills and tell the elderly they’re on their own. It’s up to them to buy insurance, and if it’s too expensive because the Ryancare voucher is too small, that’s tough. See you on the other side.

That’s really not a serious solution. We need something instead that genuinely has an effect on healthcare costs. Something that reduces the amount we pay doctors, hospitals, and insurance companies. Something that provides incentives for difficult end-of-life decisions. Something that makes credible tradeoffs between the cost of new treatments and the likely benefits. And something that gives taxpayers and patients alike a reason to care about all this.

There are both liberal and conservative ideas that can help us with this. Unfortunately, we’re not quite grown up enough yet to really start talking about them. Maybe someday.