Is it rude to be constantly checking messages while you’re socializing with someone else? That’s a matter of opinion. But a professor friend emails to remind me that rudeness is actually the least of the problems with the perpetual multitasking of the smartphone generation:

This is the way kids these days think. My administration calls it “the millennial student” and apparently we are supposed to cater to their habits. Fully half of my 60 person general physics class this 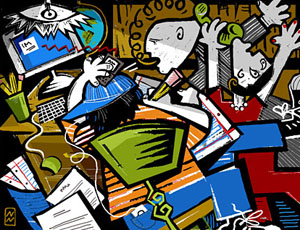 semester sits in the back of the room on either phone or laptop. They’re not taking notes. The good ones are working on assignments for other classes (as if being present in mine causes the information to enter their pores). The bad are giggling at Facebook comments.

….But here’s the thing: there is convincing evidence that this inveterate multitasking has a serious, measurable and long lasting negative effect on cognitive function. Look up Stanford psychologist Clifford Nass sometime. There’s a lovely episode of Frontline from a year or so ago featuring him. He has shown that multitaskers are not only bad at multitasking, but they are also worse than nonmultitaskers on every individual one of the tasks.

That’s the millennial student and it isn’t something to be catered to. Put the damn iPhone down before you make yourself stupid.

I should have remembered that! Nass has been studying “high multitasking” for years, and his results are pretty unequivocal. Here’s the Frontline interview:

What did you expect when you started these experiments?

Each of the three researchers on this project thought that … high multitaskers [would be] great at something, although each of us bet on a different thing.

I bet on filtering. I thought, those guys are going to be experts at getting rid of irrelevancy. My second colleague, Eyal Ophir, thought it was going to be the ability to switch from one task to another. And the third of us looked at a third task that we’re not running today, which has to do with keeping memory neatly organized. So we each had our own bets, but we all bet high multitaskers were going to be stars at something.

And what did you find out?

….We were at MIT, and we were interviewing students and professors. And the professors, by and large, were complaining that their students were losing focus because they were on their laptops during class, and the kids just all insisted that they were really able to manage all that media and still pay attention to what was important in class — pick and choose, as they put it. Does that sound familiar to you?

It’s extremely familiar…. And the truth is, virtually all multitaskers think they are brilliant at multitasking. And one of the big new items here, and one of the big discoveries is, you know what? You’re really lousy at it. And even though I’m at the university and tell my students this, they say: “Oh, yeah, yeah. But not me! I can handle it. I can manage all these,” which is, of course, a normal human impulse. So it’s actually very scary….

….You’re confident of that?

Yes. There’s lots and lots of evidence. And that’s just not our work. The demonstration that when you ask people to do two things at once they’re less efficient has been demonstrated over and over and over. No one talks about it — I don’t know why — but in fact there’s no contradictory evidence to this for about the last 15, 20 years. Everything [as] simple as the little feed at the bottom of a news show, the little text, studies have shown that that distracts people. They remember both less. Studies on asking people to read something and at the same time listen to something show those effects. So there’s really, in some sense, no surprise there. There’s denial, but there’s no surprise.

The surprise here is that what happens when you chronically multitask, you’re multitasking all the time, and then you don’t multitask, what we’re finding is people are not turning off the multitasking switch in their [brain] — we think there’s a switch in the brain; we don’t know for sure — that says: “Stop using the things I do with multitasking. Focus. Be organized. Don’t switch. Don’t waste energy switching.” And that doesn’t seem to be turned off in people who multitask all the time.

Italics mine. So here’s the thing: whether it’s rude or not, multitasking is probably ruining your brain. You should stop. But if you can’t do that, you should at least take frequent breaks where you’re fully engaged in a single task and exercising your normal analytic abilities. So why not do that while you’re socializing? It’s as good a time as any.