The New York Times ran a report yesterday about New Jersey residents who are outraged by new solar panels on utility poles that are ruining the bucolic splendor of their neighborhoods. Matt Yglesias takes a look at the accompanying photo and finds himself underwhelmed:

This is not a pastoral view disrupted by solar panels. It’s a view of utility polls, street lights, and overhead electrical wires—now with solar panels! It would be interesting to see if people actually preferred a pastoral view free of the accoutrements of electrification but I doubt anyone actually prefers that. Instead, the customary interjections of technology into the suburban landscape are normalized while any deviation from the postwar pattern is anathematized. 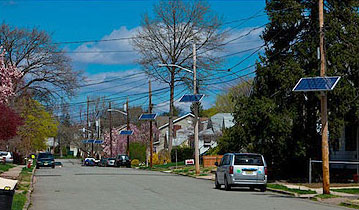 Had people 100 years ago had this attitude, I suppose nobody would have telephone service or electricity at all.

A few years ago I remember reading about a local outcry over a cell phone company that wanted to put their transmitters on existing light poles instead of building a bunch of new towers. It was over in a neighborhood called Turtle Rock, which is one of Irvine’s most upscale “villages” (yes, we really call them that). I got curious, and since it wasn’t far away I drove over to take a look. And I looked and looked. Finally I found the offending light pole and looked some more. And there it was! I didn’t see it at first, but sure enough, there was a small round doohickey attached to the pole about 20 feet up.

All I could do was shake my head. It was a light pole! And the transmitter was barely even visible. And it was 20 feet off the ground. How could anyone possibly care? But they did.

I’m perpetually astonished by the level of NIMBYism pretty much everywhere. I mean, objecting to a toxic waste dump or something, that I get. But people who live in 100% built environments are remarkably resistant to even the most innocuous changes in that built environment, let alone things that might potentially have a minor but real impact. It’s just a huge battle every time.

And in the non-built environment this is becoming a huge problem too. We need solar power and wind farms. But solar is no good if it’s built in the sunny Mojave Desert because it might impact tortoise breeding grounds. Wind farms are no good if they mar the view off Hyannis Port or kill too many migrating birds. Everybody wants change, but nobody wants that change to occur anywhere that might affect their own backyard or their own pet cause. This is hardly breaking news, I know, but one of these days we’re going to have to decide which is more important: marring our views a bit or preventing the planet from baking to death. I vote for the latter.