The New York Times announced today that it will put up a paywall at the end of March. Felix Salmon points out that the pricing is kind of weird:

….The pricing structure is also a strong disincentive to use the iPad app at all, of course. If you’re already paying $15 every four weeks to have full access to the website, why on earth would you pay extra just to be able to read the paper on its own dedicated app rather than in Safari? I, for one, prefer the experience of reading nytimes.com on the web on my iPad, rather than reading an iPad app which has no search, 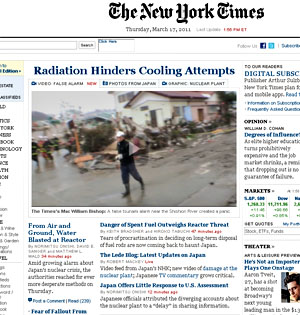 no links, no archives, no social recommendations, etc etc. If the NYT wanted to kill any incentive to read and develop its iPad app, it’s going about it the right way.

Maybe so. Or maybe the Times plans to improve their iPad app to make it worth the extra money? Beats me.

Overall, Felix is pretty down on the paywall, but then, he’s down on most paywalls. I’m a little happier about it than he is. Overall, the Times seems to have struck a decent balance here: you get 20 views free per month before the paywall kicks in, and you can follow links from other sites (blogs, Facebook, etc.) free. This will generate a bit of revenue from serious readers who routinely read the Times heavily, but keeps the Times widely available to casual users and also keeps them front and center among the kinds of sites that refer lots of traffic and drive online conversation. That works for me pretty well. I don’t like linking to pieces that my readers can’t get to (sorry about that, New Republic), but the Times paywall doesn’t interfere with that. I’ll have to subscribe myself, of course, but that’s OK. I’m a heavy user, and there’s no reason not to ask heavy users to pay for online content.

It’s true, as Felix says, that a rough calculation suggests that the paywall won’t initially generate a ton of revenue for the Times. Still, I really don’t see a business model going forward in which companies like the Times continue to lose print subscribers as they give away their product online. One way or another, news readers have to get used to paying for content that they use heavily, and they might as well start getting used to it now. After all, if the Times, which is easily the best general purpose news outlet in the country, can’t convince people to pay for their stuff, then who can?